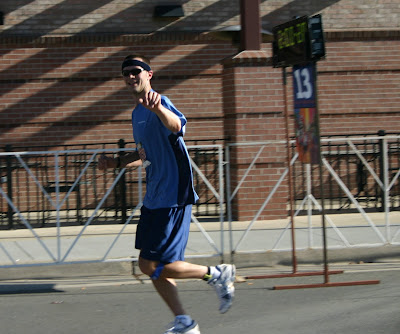 Well, I made it. Woke up at 4am, ate a Balance bar with my 4 Advil while icing my knee a bit. Sipped on some coffee as I made my way downtown in the dark. When I got to City Park, the night came alive. There were people everywhere and a DJ blasting 'pump you up' music. The lines for the port-a-potties were a mile long with nervous runners trying to empty their tanks before the start.

After the Star Spangled Banner was played, they shouted the countdown. Everyone cheered and started moving towards the starting line. I was probably the 1000th person in line, so it took me a minute or so to get there. It was a very cool feeling crossing the starting line, but that was quickly squashed when I realize just how crowded the road was. Everyone was jockeying for position and no one could really get any type of pace going. The first mile wound through City Park and everyone was jammed in like cattle. 10 min 30 sec. was the time on the clock at the 1 mile mark. Not quite the pace I was hoping for.

After mile two, we were finally out of the park and on Colfax (the road we would be on for the remainder of the race). As I was approaching the heart of downtown Denver, the knee pain came in full force. I prayed hard for it to go away, but no such luck. It hurt bad, but using 'Terry' from Survivor as my motivation, I tried to endure for the remaining 11 miles.

At the 4 mile mark, the long 8 mile incline began and some runner thought it would be a good idea to 'draft' off of me. So for 2 miles I had someone running so close behind me, I thought he was going to step on my heals and trip me up. Very annoying, but I was concentrating too hard on running to try and shake free of him.

I don't remember much between miles 4 and 10...except the constant reminder that my knee was not happy with what I was doing. I do know I failed miserably at several attempts to get water from the people on the sidelines. Some people would walk a bit while they drank, but I realized I couldn't stop or else I probably wouldn't have been able to start back up again. So I tried the drink as you run thing and found that more water made it on to my shirt than in my mouth. What water did make it into my mouth barely made it down my throat since I also realized, I'm not good at breathing, swallowing and running at the same time.

Around mile 10, I look over and see this big guy standing in the median yelling my name and cheering me on. It blew me away that James would take the time to come down and cheer me on. What a huge boost of adrenaline that gave me.

At mile 12, I could see the Colorado Mills Shopping Center in Lakewood, where the finish line was somewhere hiding. There was a large hill leading up to the shopping center and I started to get another adrenaline rush when I heard the roar of the crowds in the distance...only to realize it was just the cars on Interstate 70 just behind the shopping center.

As I was approaching mile marker 13, I saw them. Tanya, Megan and Zoe were there on the sidelines and I don't think I've ever been so happy to see them. For that brief moment, the pain went away. It was a highlight to wave at Megan and have her wave back with a big smile on her face. One tenth of a mile later, I was across the finish line, handed a half marathon finisher medal and searching out the closest water station. The stopping caused my knee to freak out and I could barely walk at that point, but what fun to reunite with Tanya, the girls and James to celebrate. I was so excited to see them, that I tried to tell them about the race only to find that it was more important that I keep breathing since I almost started to hyperventilate.

Final thoughts? It was fun to stretch myself and do something I didn't think I could do. My running career is over, but I wouldn't change a thing for it was a fun challenge and growing experience for me.

Sorry this post is so long, I wanted to get the details I could remember out before I forgot them.
Posted by Woody at 2:07 PM 2 comments: