Not to keep bringing the marathon up for discussion, but there was an interesting piece of news that came out last Thursday. Seems the officials made a mistake in setting up the course on race day. A few misplaced cones routed the runners an extra half mile out of the way in City Park! No one noticed the mistake until runners with GPS watches crossed the finish line to find out they actually ran 26.7 miles!
Yet, another funny memory of my marathon experience. They promise to adjust everyone's times to reflect the additional distance, so it looks like my time may drop to 3:54! Here's the news story: http://www.9news.com/news/article.aspx?storyid=70760
Posted by Woody at 10:40 AM No comments:

A big thanks goes out to... 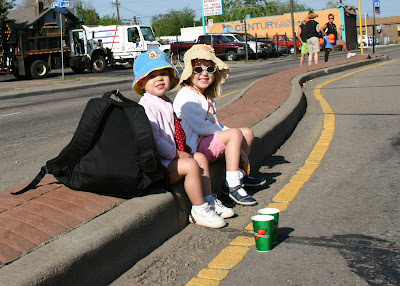 I would be remiss to not thank a couple people who were a big part of my marathon journey...

Tanya & the girls: They were amazing throughout my entire training and on race day. They were so supportive and encouraging to me...even lil' Zoe. At one point during the marathon, both girls were ready to hand me some Gatorade as I ran by, but I didn't see them in time and grabbed some from the water people instead. That was probably a good thing since every time I grabbed some at each station, at least half of it sloshed out of the cup and hit the person handing it to me.

The Dawson's: Keith, Clare & Heather have been in our home group this past year. They all came out to cheer me and Clare's brother-in-law on. Keith seemed to pop up about every 3 miles along the course cheering me along. He even ran next to me for about 50 feet! It was awesome.

Scott & James: They both tackled the half marathon and kicked butt. For James, it was his first and was amazing running on 3 hours of sleep after having to work the night before! My cousin Scott placed 82nd out of 1695 participants!! It was great knowing those guys were out on the course at the same time, albeit 13 miles ahead of me! All our families enjoyed a pre-race "carbfest" dinner the night before.

Wes: My brother is a huge reason I ever got into running. He paved the way by running in two marathons a couple years ago. He was my running expert as he patiently answered so many of my questions and sent me what I called my "Runners Bible". It was a guide to running that really helped me train and prepare. His encouragement was unending. Thanks Wes! Best wishes as you tackle #3 in a few short weeks!
Posted by Woody at 2:34 PM No comments: 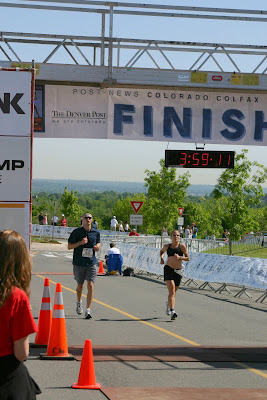 The race is over and I finished! My original goal was to finish under four hours. Well, I like to cut things close, so you can see just how close I was. My chip time was actually 3:59:03.

The race began with me following the "3:30" pace leader. If you follow this guy (or gal), he'll guarantee to get you across the finish line within a minute or two of that time. It was perfect. The pace (8 min/mile) was very comfortable and it remained that way until mile 18. I felt a little fatigue and dropped my pace a bit, but then at mile 19.5 came the infamous "Wall". I went from an 8 min/mile pace to about a 12 min/mile pace in just one mile.

I had to walk at least a mile of the remaining six, which happened to be all uphill. I was very bummed about that, but at the time I didn't care. My body was in chaos and couldn't move the way that had come so effortlessly the previous two thirds of the race. My brain was in a complete fog and my legs were screaming at me...so I walked on.

At mile 25, I looked at my watch and saw I had 10 minutes to make it under 4 hours. So I started my jog and ever so slowly, made it across the finish line.

Hey...check out the Denver Post article! It was on the front page of our Sports section today. Scroll down a bit and look for a familiar face. 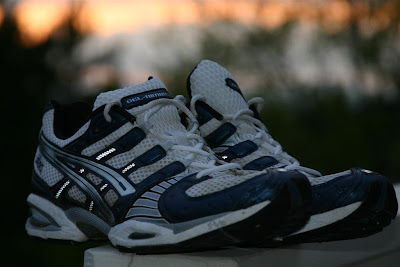 My time has come. Sunday is the day of my first marathon (no, I'm not running to Yellowstone). Have you ever wondered what it takes to prepare for a marathon? Probably not. I’m going to share with you what training for this marathon has cost me. I officially started training on January 1, 2007…so 139 days later I’m now going for it! Since I’m like many other running nerds out there, I logged everything I did during this time.

My marathon training cost me:

9 – gallons of sweat (gross I know, but it’s true! There are sweat calculators out there. I’m sure this is a modest guess since I’m a sweat-making machine)

I was curious just how far 602 miles is. From Denver, the closest I could get to something notable was Yellowstone Nat'l Park. It is 586 miles from Denver. Don't worry, I don't plan on making that trek anytime soon. Maybe I would if I could accrue 139 days of vacation from work!
Posted by Woody at 2:26 PM No comments: