Whoa!  Where did the last three weeks go?  I think this is officially the latest posting of a race report yet.  Hope it's not a pattern.  Life is busy (as it is for everyone).

This was my third time heading out to Moab and this trip I grade myself with an "F" for taking in the Moab experience.   Moab is a place of incredible beauty that is truly captivating and for some insane reason, I was only there for 16 hours.  That's just wrong and if I go back, I'll make up for it for sure.

Here's how Friday & Saturday played out:
6+ hour drive from Denver (arriving after 10pm)
16 hours in Moab (including sleeping for 7 of it)
5+ hours back to the Rockies to meet up with my family

I met up with Jaime at a motel and we caught up for a bit before heading to bed.  The 6am wake up gave us plenty of time to eat and prep for the race at eight.

As we parked the car and began our 3/4 mile trek to the start, we were greeted by the rising sun over the La Sal range.  The sensory overload was just beginning.

As in the past, waiting around at the start was chilly, but that gave me time to move around and snap some pics since I wouldn't be running with a camera. 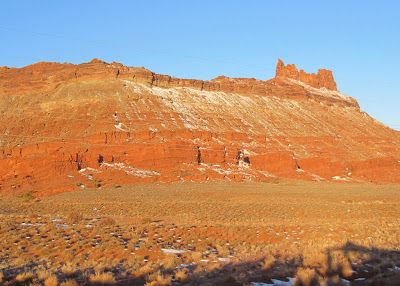 After having a crummy training period post Bandera, I set the bar quite low for what I thought I could accomplish out there.  I've learned that surprises rarely happen in a race and typically a good one happens only when I go into it prepared/focused/rested/ready.  I felt rested for this, but that's about it.

The pace at the start was once again hot.  It took me two miles to realize my watch never started, so once I got that going, I caught the third mile - a 6:51.  Ouch.  I was not at all prepared for that, so I backed off.  I was running with Jaime for a bit, but he was running strong and I had to let him go.

While I slowed down, I locked into what I thought was a sustainable pace.  I had no real splits to follow, so I just plugged along.  The best way to describe how I ran this race was that I was in the right gear at the right time.  No big risks and no big failures.  I just cruised as best I could.  The last two years featured pretty spectacular blowups in the last 6 miles.  I was determined to run a smart race AND every bit of those last miles.

When I hit the slickrock section, I found myself in this weird pocket where many people were behind me, but no one was in front.  For this race, it's nice to have people in front to help spot the "pink ribbons" that mark the trail.  Route finding is a major challenge on this course and more times than I care to admit, I found myself coming to a stop as I couldn't figure out which direction to run.

Prior to reaching the final aid station (mile 28), I came upon a struggling Jaime.  He had pushed it very hard and the slickrock beat him up pretty good.  When we started talking, I could tell exactly what was happening to him as I've been there myself.  I knew he'd come around and finish well...but I didn't realize just how much  of a 180 he'd pull.

I passed through the AS and started the final 6 miles to the finish, my mission was to run every step of it.  I had fueled well all day, so the task at hand was quite easier than previous attempts.  I was trucking while trying to keep a steady stream of calories going down the hatch.

I was passing a bunch of people, but mostly they were back of the pack 33k folks.  No one passed me until....I heard these footsteps coming up from behind.  It was a weird sound since no one had passed me for the last hour or more.  It wasn't until the person was level with me that I heard, "Let's go Woody."  And who should appear, but JAIME!  What?!?  I had turned around on a prior flat stretch and saw no one for at least a mile or two behind me.  Where the heck did he come from?

I've run a bunch of ultras and his transformation from crash to crankin' was probably the most inspirational thing I've seen.  Seriously, he was flying!  All I could say was, "Now that's what I'm talkin' about!"  In about 60 seconds, he was already a quarter mile past me.  There was no stopping him and I couldn't have been happier watching this show.

I'm quite happy with this race on many levels.  There weren't really any highs or lows and I'm okay with that. Instead of carrying a bunch of EFS/water flasks, I decided to dump 800 calories of EFS into one bottle and filled the rest with water.  I sipped on that concoction for 3 hours.  When that was empty  I pulled out another bottle of defizzed Coke.  I'm guessing that was another 300 calories.  That steady stream of calories all race helped keep my energy steady.  Usually, I get on a cycle of taking calories every 20-30 minutes.  For this  race, I was sipping my fuel every 7-11 minutes.  Big difference.  I'm going to experiment more with this method in future races and runs.

Here are a few final shots from the finish.  The Colorado River was almost frozen over, but I'm thankful the temps were warm.  Another glorious day at the Red Hot 55k! 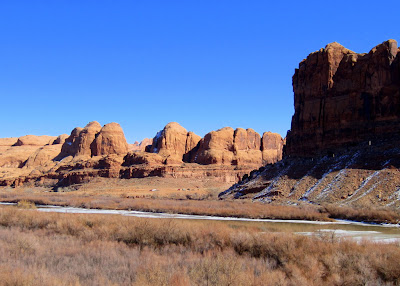 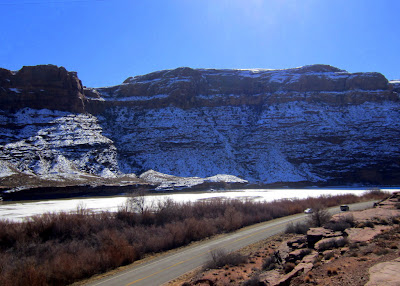