I had hoped to get in a 15-20 mile run last weekend, but since my Ruby-Owen outing only fetched me 10 miles, I decided to go out again for round two on Sunday morning. I'm not one that prefers double bagging peaks, but with no map and limited time, I decided that heading back up to the familiar Owen and then traversing to Purple Peak was my best option. I was frustrated because there were trails all over the place, but I didn't know where they went. I wasn't feeling adventurous enough to start heading somewhere unknown.
I awoke to my alarm at 5:30 and got out in the dark and cold morning. I wasn't feeling the trail running love, but decided to push through. About a mile in, I noticed that the wind was particularly strong with no sign of letting up. I hit the main trail just as the sun rose and cast a red glow on the mountains as it was filtered by some clouds. 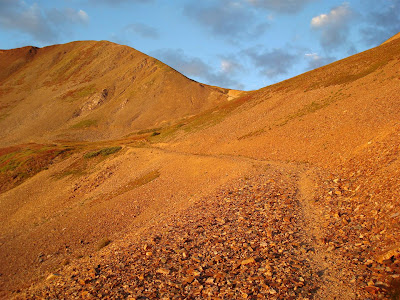 Am I running on Mars?
As I mentioned, the wind was nuts. I made it to the saddle and seriously considered heading back down and calling it a day. I have no idea what speed it was whipping at, but I knew I had never experienced anything like it. If you haven't watched the "Mt. Owen Summit 360" video in the previous post, please do so to experience what a more "normal" wind was like up there. Now turn your speakers up and listen to this 15 seconds I captured up on the ridge.

I plodded along with one hand covering the ear that faced the wind since it was entering and attempting to push my brain out the other side.

I spontaneously decided to take a quick detour and scramble up to one of the false summits to see the different views I knew it would offer. I wasn't disappointed. 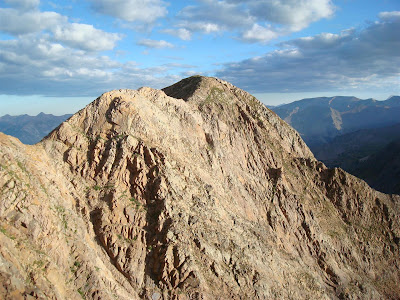 Mt. Owen summit from one of the false summits 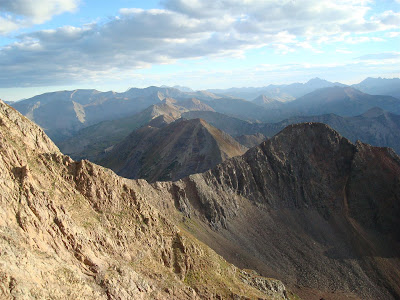 The traverse from Owen to Purple Peak

I made it to Owen's summit and grabbed a few minutes to regroup out of the wind. For some reason, it wasn't as strong there. As I stared out at Purple, I couldn't make out any consistent trail. Once I started, I figured I'd just keep shooting for the prize which was always in sight. 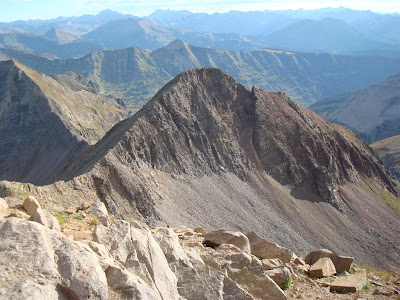 Purple Peak as seen from the summit of Mt. Owen
Well, I did find a faint trail that I proceeded to lose repeatedly. The climb to the summit was probably the most challenging of any climb I've done. Difficult Class II? Class III? I was on all fours trying to navigate the shifty talus. I was wiped mentally and physically by the time I reached the top. The constant wind was taking its toll. I snapped a few pictures and started what had become in my mind, the dreaded return trip. 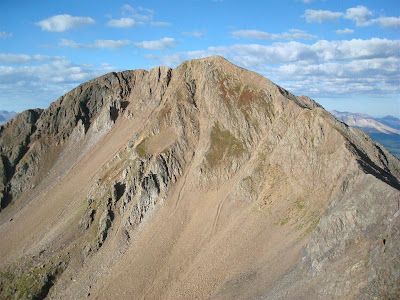 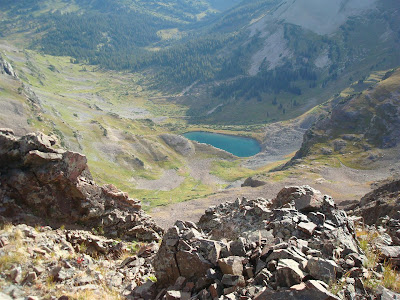 Blue Lake which sits just below Purple Peak
Once again, the return trip offered no further mishaps or missteps. I can't tell you how happy I was to reach the saddle between Ruby and Owen and start to drop down where the wind could no longer blast me. I made it back to the campsite at just over 11 miles in 3:09. In two days of climbing, I didn't come across any other hikers. Despite the adversity, I wouldn't trade a minute of the time I spent up there. Summer is almost over, and those peaks will have snow on them soon. I will no doubt scan these pictures all winter long scheming up adventures I can embark on next year. 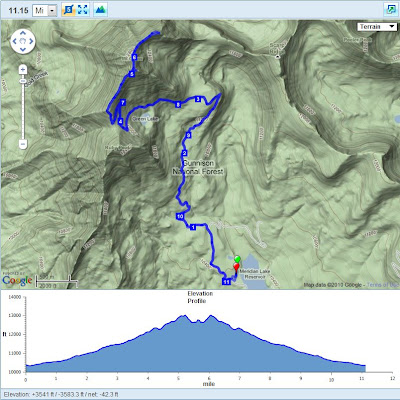