We spent Labor Day weekend camping near Buena Vista at the Chalk Lake Campground.  It's a beautiful spot to spend a weekend.  Our first day featured some play time at the lake, scrambling up a slope of boulders, and a hike to Agnes Vaille Falls.

The trailhead for Agnes Vaille Falls was right across the street from the campground.  It's only a half mile hike, so you can expect a packed parking lot when you arrive. 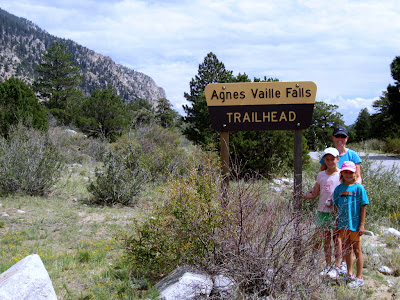 Sadly, we learned Agnes Vaille was an avid outdoorswomen who died after falling 100' during a winter ascent of Longs Peak in 1925.  She actually survived the fall, but succumb to hypothermia before she could be rescued!  That was definitely a downer as we started the short hike.  Interestingly, the shelter on Longs just below the Keyhole is also named after Agnes Vaille.

On Sunday, I convinced the ladies to spend a morning at the Mt. Princeton Hot Springs, while I took a jaunt up Mt. Antero.  I didn't get an early start, but was able to shave off 3.5 road miles when Tanya offered to drive me to the 2WD trailhead.  I started at 7:30am and the plan was for me to meet them back at the campsite at 12:30pm.

If you have a good 4X4 vehicle, you can drive 3+ miles up a very rough jeep road and get much closer to treeline.  I wanted to run it and make it about a 18 mile outing (inc. the road back to the campground).


I arrived on the summit at the exact moment another hiker did.  We started chatting and he informed me that I just passed Eric Lee as he descended from the summit on his way to the final two peaks of his attempt of the Nolan's 14.  Awesome!  He did complete the challenge in 57:27.

After introductions, I learned my summit companion was Bob Whitely, 20 time finisher of the Pikes Peak Marathon!  He's a 68 year old hiking and running machine...and a really nice guy.  We spent over thirty minutes on the summit talking and enjoying the views.  He was getting in a last long run in preparation for Imogene this weekend.


After saying farewell to Bob, I began my descent and didn't stop until I reached the trailhead.  I felt great for the first 3-4 miles, but then my quads reminded me of what I did to them two weeks prior at Leadville, and the rest of the run was a tad uncomfortable.


I made it down in 1:30 and started the 3.5 mile road run back to the campground.  I was tired, hot, thirsty, hungry, and all around ready to be done.  Lo and behold, two minutes later Tanya came driving up the road.  I've never been so happy to see my truck!  I hopped in and we were off to lunch and then back to the Hot Springs for the afternoon!