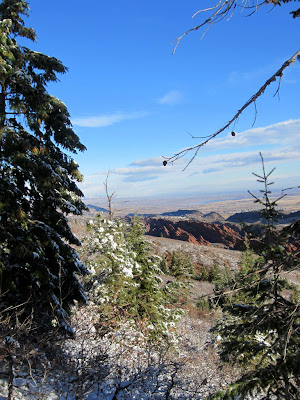 Work has been pretty stressful for the last two months, and coaching my daughter's soccer team this fall has eaten up most of the available free time in my schedule.  So when I got word at 6:55am on Saturday that our soccer game was canceled, I grabbed my gear and headed for the hills.  I needed some real solitude to unwind and my gracious wife said these fantastic words as I stepped out the door, "Honey, take your time and just enjoy yourself.  Don't worry about us."

My destination was the best kept secret on the Front Range.  Indian Creek.  I haven't been back there for a year and half, and that's crazy when you see how amazing the running is.  I don't understand why it's not more popular.

What I didn't tell my wife, was that my "under the radar" plan was to go on a bear hunt.  I know that area is known for lots of bear crawling around and this time of year is perfect since they're actively on the prowl for food before the long winters nap.  I've never seen a bear in the wild, so I planned to run with my camera in hand and capture a shot - hopefully at a safe distance.

I started in Roxborough State Park heading up the Carpenter Peak trail before veering off on the Elk Valley trail.  Eventually that connects to the Indian Creek trail and the true fun begins.

The trails got quite muddy on the descent from Carpenter and I had to pull some serious willpower out to not turn around and head back into Indian Creek.  I wasn't ready to get back to real life stuff.

I can't tell you how thankful I am for the opportunity to run in such beautiful places that usher in the peace and solitude that I need.  Sure it gets eery being deep into a place that redefines what quiet means and where your footprints are the only ones those trails will see for days - or weeks.  And sure it stinks when its over, but as I've learned each time I head out the door - there's always another day to run. 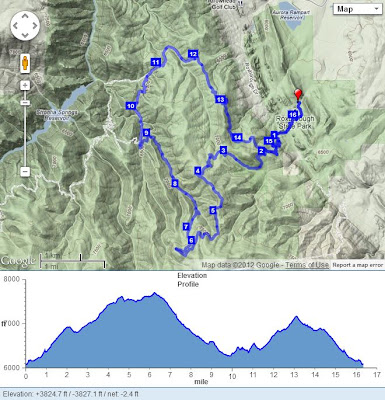 My wife has become quite the trail runner this fall.  She trained for and ran the Bear Chase Half Marathon and then a week later I got her to join me running my favorite front range trails - Roxborough State Park.

It wasn't just a casual jog around the valley floor either, no we ran up Carpenter Peak AND did the Powerline Loop before heading back down!  What a great afternoon it was!

I've had a lot of amazing trail runs this year, but this one immediately becomes a favorite.  I hope there are many more to come.
Posted by Woody at 8:49 PM 2 comments:

After last years Wildcat Mountain Trail Race in the snow and cold wind, I thought for sure we would be in for a mild & sunny race this year.   Just one weekend prior, I hung out at the Bear Chase Race on a gorgeous day watching Tanya rock her first trail half marathon.  Needless to say, I had that kind of a day all lined up in my mind.

No such luck.  Yes, we were met with a 28 degrees at the start under foggy and misting skies.  It had rained the night before, so the trails had just enough moisture in them to create sticky mud which promptly gathered on the bottom of your shoes with 5 lb. clods.

From the start I tried to stay with the lead pack, but one guy went out fast and created a small gap.  I started chatting with Andy Palmer, but we were cranking out a 7 min pace, so that didn't last long.  He pulled ahead and began the chase of another guy that had recently passed us.

After about two miles, the realization set in that I wouldn't be catching up to the top three guys.  They were now flying at a sub-7 pace and I was in no shape to attempt that for 20 miles.  I locked into a pace that was by no means comfortable, but possibly sustainable.  I had 5th place about a minute or two back, so I had plenty of motivation to keep moving.  All these paces were total guesses because once again, my watch battery was dead on the start line and I was left to run 100% by effort.  I'm becoming more and more convinced that this is the way to go.  I love the freedom of running by effort and having one less distraction.

Around mile 10, our tour of The Bluffs ended and we joined all the 5 & 10 milers...and the passing began.  It definitely ain't the easiest or most graceful thing to accomplish.  The trail is singletrack, so passing means venturing into the tall grasses.  Even though I felt like I had slowed considerably, by the number of people I was passing, I must have still been cruising at a pretty good clip.

The four out & backs on this course confirmed the decent lead the top three had, but they also let me know I was putting distance between myself and 5th place.  Although on the final one, I noticed Andy was closing in on #1 and I was gaining rapidly on 3rd place.  The last two miles are almost all downhill and I gave it my all in a final kick.

If I had another mile, I might have caught him, but as it stands I crossed the finish line one minute after for 4th place.  2:24:51.  Good for a 12 minute improvement over last years snowy scramble.  Somehow I also got first in my age group...gotta love chasing the fast 40 year olds!  Okay, it also helps that there were only 24 finishers of the 20 mile race.

I'm going to try the HR Backcountry Half Marathon next month and if I learned anything from this race, I really need to get in some training runs in the low 7's on those trails before I attempt any speedy shenanigans again.
Posted by Woody at 2:56 PM 6 comments: