Looks like Geoff Roes' name just popped up on the Bandera entrants list. I guess he's game for taking me on again after his narrow 2hr 38min margin of victory in Steamboat last September.
Nick Clark set the course record at Bandera last year (9:16:57). I'm thinking it's going down even if Geoff has a mediocre day like he did in Steamboat. While battling sickness for several weeks, he went out and knocked 15 minutes off the previous course record. Man, I wish that's how I performed when feeling sick!
Six weeks out and I'm getting excited. In the words of RD, Joe Prusaitus, "Bandera is gonna be huge this year..."

I'm thankful for a lot of things, but since this blog is about running, I want to say just how much I'm grateful for it (not the blog, but running)!
I'm thankful for the trails that take me on some amazing adventures to beautiful places.
I'm thankful for my health that allows me to wake up each morning and run. Every day I can do this is a blessing.
I'm thankful for races as they provide motivation to train, bring people together, and create a memory that will last a lifetime.
I'm thankful for all the wonderful people I know that have made this sport so much fun to share.
I'm thankful for my wife & daughters who support me through it all!
Happy Thanksgiving!
You've all probably seen this, but it is a great reminder of how incredible an opportunity it is to get outside and run.
Posted by Woody at 10:57 AM 1 comment: 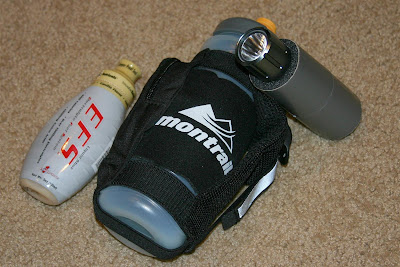 In preparation for Bandera, I'm experimenting with all sorts of fueling options. I'm trying to up my caloric intake from 200 to 300 per hour. In Steamboat, I felt like I wasn't getting enough, but since I was despising gels during the second half of the race, I wasn't motivated to take in any more than absolutely necessary. I've heard good things about the EFS liquid shots as one 5 oz. flask has the calories & electrolytes of about four gels & one S-Cap. I took one on a 20 miler two weeks ago and was not impressed. The consistency was too thick and the vanilla taste was too strong. It just didn't go down well at all.
After reading Scott Jaime's MMTR report, I noticed he diluted the shots in a bottle of water. On a 30 miler Saturday, I mixed up two handheld bottles with water and one EFS shot in each. I drank one bottle every 1.5 hours. The diluted vanilla taste was light, smooth, and something I could see myself drinking for a long time in a race. It also worked very well at keeping my energy levels up. I did eat two gels during the last 8 miles, but if I had another bottle of water/EFS, I would have been fine.
My flashlight is still working great, but I found that when the temps drop into the low 20's, the aluminum light turns into a piece of ice. Because it is so small, I found I need to grab it tighter. Even with a glove on, it's cold and the firm grasp isn't comfortable. A little foam pipe wrap and some duct tape did the trick. There's no extra weight and now it fits in my hand perfectly.
Lastly, I took the Montrail koozie I got from the Run Rabbit Run and cut the bottom out to fit it around my bottle. Now as the contents approach the freezing point, my hand doesn't follow suit.
This running thing is all about making adjustments right?
Posted by Woody at 9:35 PM 3 comments:

With the temps dropping, wind blowing, and flakes flying, I found
this little poem in the latest issue of Running Times to provide some timely wisdom.
Whether the weather be fine,
Or whether the weather be not,
Whether the weather be cold,
Or whether the weather be hot,
We'll weather the weather
Whatever the weather
Whether we like it or not.
The poem was found in a good article on motivation by ultrarunner, Eric Grossman. Here's the link:
Developing Intrinsic Motivation
Patrick & I hit the HR trails on Saturday for a long night run. We started at 9:00pm. It was quite chilly (mid-upper 20's) under clear and starlit skies. The breeze kicked up a few times and caused a few body parts to numb up, but overall we managed just fine. When we hit the 22 mile mark, we opted to skip a 4 mile out & back section in order to make the 4 mile uphill trek back to my house. 26 miles in about 4:02. For Patrick that capped a huge mileage week that included 17 miles on Saturday morning!
My favorite part of the night was the double creek crossing we encountered. I daintily hopped the rocks to avoid getting wet. Patrick splashed through both times. To give you idea of how cold it was, my hydration pack's "insulated" tube froze solid. I can only imagine how cold his feet must have been. I would say he's ready for Hellgate!
Posted by Woody at 10:14 PM 2 comments:

On Sunday evening, the family gathered around the computer to sign me up for the Leadville 100. Why the whole family? Well, this is a big deal...and a decision that was not made casually. I need their help, support, and encouragement on race day AND every day between now and then.
So there we are, filling out the online form. Here's the extremely cheesy part....when it came time to click the "Submit" button, we all placed a hand on the mouse and pushed down. Well, that caused the mouse to move and click on some white space next to the button. Two more attempts produced a bunch of laughs, but still no submission. Finally I clicked while their hands just sat on top of mine. The next screen?
Payment Declined.
What?? Is this a sign that I shouldn't be doing this? Geez, talk about anti-climatic. I tried again and got the same result. The rest of the family walked away.
About a minute later, I got an email from my credit card company claiming "suspicious" activity on my account and asked if I authorize that activity. Heck ya! I clicked the "I authorize" link, went back to the LT100 site, submitted the form, and....
Payment Confirmed!! 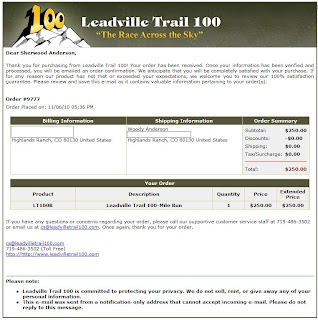 So I'm registered. Why register 10 months before the race? There is something powerful and motivating about putting up the money and clicking the button. My life changes and I quickly develop a focus that just isn't there when I'm "thinking about it". I love knowing right now that I'll be running 100 miles in 2011.
August 20th and into the 21st will no doubt be the longest day(s) of my life. I'm looking forward to the adventure in store between now and then. There are many great 100 milers out there, but I consider Leadville as the "home" race. I've spent a lot of time up there and can't wait to compete in "The Race Across the Sky".
Posted by Woody at 6:47 PM 6 comments:

I've had a big obstacle to overcome this fall. Running trails in the darkness of the early mornings. I've spent the last two winters training for road marathons, so it had never been an issue for me.
When September rolled around, I attempted to run the Highlands Ranch trails in the dark. I immediately faced two problems. One, neither of my headlamps lit the trail up enough, so my pace suffered tremendously. I couldn't make out the ruts and undulations of the trails and had several "hyper-extending" experiences. Very frustrating. Second, those little bunnies rustling in the leaves just off the trail suddenly sounded like huge beasts...that were ready to attack.
In the backcountry of HR, we have deer, elk, coyote, fox, porcupine, and a whole bunch of smaller critters. None of them are anything to fear, but when it's dark, my mind likes to play tricks by getting me to abandon rational thinking. Rational thinking tells me these animals want nothing to do with a runner huffing and puffing on the trail. They see and hear me long before I see or hear them...and they run away. Irrational thinking finds me believing that they see me coming, get hungry, and will charge or coordinate an ambush. It's never happened.
This morning I had 5 deer get spooked and scamper 50 feet off the trail. Then I had an encounter that made me jump higher than anything before. A mouse...yes, a ferocious mouse scurried right where I was about to step and caused me to perform a flailing maneuver in order to avoid squishing it. I've also had several porcupine encounters, but only one was close as I came barreling around a corner. They sort of mosey along, and with a coat of quills, I'd probably not be in a rush to get anywhere either.
So how have a rectified my issues? Two things. I bought a Coleman Max 115 lumen LED handheld at Walmart ($24). It's amazing. I must look like a locomotive coming down the trail. I love holding it too. When at chest level, I see every shadow on the trail. When going fast downhill, I drop it to waist level and I can see every rut, rock & root. I'm now right back to the same paces I run in daylight. For kicks I raised it to "headlamp level" to see if a 115 lumen headlamp would do the trick. The angle was not nearly as effective for making out everything on the trail. The light takes three AAA batteries that only last 6 hours, but I bought some rechargeables, so I'm good there. 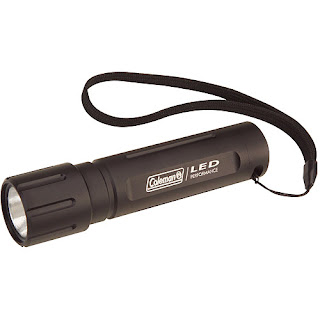 Regarding me being fearful of the creatures lurking in the dark, it has just taken time and practice. I've done it enough in the last two months that I feel comfortable with the whole thing now. One solution that has helped is to bring along my iPod Shuffle and listen to music. I know that most people would prefer to hear the rustling in the bushes, but I don't. The music blocks that out and I can run in peace...versus getting frequent, quick, and unnecessary releases of adrenaline. I've decided to only care about what is on the 20-25 feet of trail directly in front of me. The flashlight takes care of that, so I know what's coming. 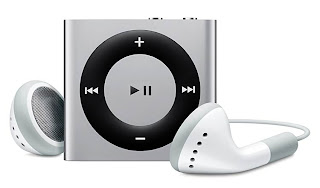 With my running plans this winter, I needed to come to grips with running trails in the dark. If I couldn't, I figured my plans would need to change. I'm glad it's working out so far and my confidence is building. I'm sure the day after I post this some elk is going to plow me down, but until then...I'll be out there.
Posted by Woody at 7:20 PM 5 comments:

It has been just over six weeks since Steamboat, and I've been simply loving my runs lately. No pressure, no training, and pretty much running however I feel that particular day. Even though I've had some longish runs, I feel totally rested from the long buildup of training and racing this summer.
With all that said, I'm ready to train again. I've been feeling like I want to sign up for something and get out of bed while it is still dark to prepare for it. I had planned to just go with the flow for another month or so before beginning my training for Moab, but that seems too far away now.

With two 50 milers under my belt, I feel it's time to take the next step up the ladder and shoot for a 100K. After chewing on it for a week, I just signed up for Bandera in January. It's all rolling hills with plenty of rocky singletrack. Unless something wacky happens with the weather (like it did last year), it looks like the rocks and how well my feet can handle them, will be the challenge with this race.
Leadville registration opens on Thursday. Anyone in? I may be soon!
Posted by Woody at 7:56 PM 2 comments: