While the snow stays away, it's off to Indian Creek to play...

That had been my motto during the last six weeks of fantastic trail running weather.  I ventured back over the first weekend in December to take advantage of a 68 degree day!  My partner in crime was Jim P, and we thoroughly enjoyed cruising the Roxborough and IC trails until we parted ways so I could suffer for a few more miles than he was planning.

I did almost the same loop as the previous week, but counter-clockwise.  That is definitely the way to go!  After knocking out the Roxborough SP road (sans traffic), you're immediately on fun singletrack.  By the time you start to fade late in the run, you're treated to long descents down the Ringtail & Sharptail trails.

As we descended from Carpenter Peak towards Waterton Canyon, we kept looking up to spot some low-flying plane.  The roar was unmistakable   Well, we were mistaken, because the noise was simply the wind whipping through the powerlines overhead.

At the top of Round Up, we said farewell as Jim made his way over to Ringtail and I started down Steven's Gulch.  At the bottom, I encountered more creepy cabins. 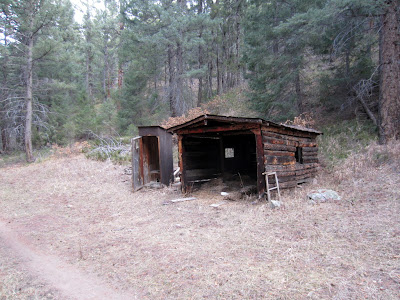 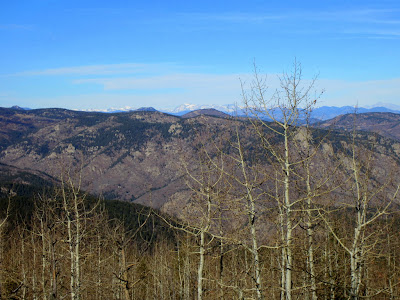 My take-aways this time around: