I still have a bunch of posts to toss up here from all the fun runs this summer.  But before that can happen, I've got one more big race to tackle.  All the logistics are queued up nicely for a successful run.  But we all know that doesn't matter since it will be the thing that comes outta nowhere that knocks me down.

My goal time is the same as last year.  I tweaked the splits to be a little more realistic and I hope the course change (shaving off the "new" 2.5 miles from last year) will help keep me on track.  I'll probably be a little slow coming into Winfield as 9:22 might be a tad fast.

I wonder if I'm the only one that has run Leadville three times in three consecutive years and hasn't run same course yet.

I'm once again in great hands during the second half.  Jaime is pacing from miles 50-86 and Tanya will take me to the finish from Mayqueen (mile 86). 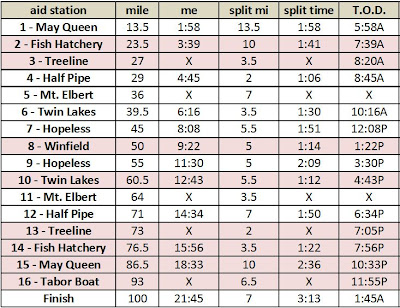 me = my total running time during the race.
split mi = the distance I’ll run to get to the next aid station.
split time = the time it will take me to run the split distance.
TOD = Time of Day
X = means not tracking a split for this station.

If you want to follow along throughout the day & night, here are your options:
1.  Live tracking website.  Just search for my name.  I think they record outbound/inbound splits at Mayqueen, Fish Hatchery (aka Outward Bound), Half Pipe, Twin Lakes, Hopeless, and Winfield.
2.  You can get updates on my Twitter Page.  My crew will try to tweet an update at each of the aid stations (highlighted in pink).  Those tweets will also post to my Facebook page.
3.  Facebook.  As mentioned above, the crew updates should show up there.

This was my third running of Silver Rush after taking a year off in 2012.  SR was my first ultra in 2010, so I get a little sentimental with this one.  I wanted one last 50 miler before the LT100, but the timing wasn't the best.  Silver Rush was two weeks after the Pb Marathon, which wasn't such a big deal.  But in between the two, I went backpacking on the Colorado Trail covering 116 miles in just over 4 days - not the smartest "taper" for a big race.

I'll post all about the backpacking trip later, but I knew before I signed up for SR that I'd be running it on dead legs.  I tried to tell myself that backpacking made them much stronger and helped build endurance, but six days of rest wasn't quite enough before tackling a 50 miler.

I drove up to Leadville the morning of the race and got to hang out with Andy before the start.  If you haven't been following him along this season, you need to!  He's totally dialing in his nutrition and running and knocking off some massive PRs along the way.  After running SR several times, he nailed an almost TWO HOUR personal best this year!

My game plan was to take it out slow and just let my legs slowly ease into it.  The problem was that my legs felt amazing.  So that plan got tossed out and I just ran as I wanted.  Probably too fast once again.

Around the Printer Boy aid station (mile 13), Michael Aish came running up behind me.  I was confused because he won this race last year, so I don't know why the heck he was behind me.  Come to find out he was just out for an easy run after bagging 30+ miles on Elbert, Massive, and Hope Pass the day before.  We ran together and chatted about all kinds of things for about 25 minutes before we started the climb up Ball Mountain and my ability to talk was over. We had been running too fast while talking and it wasn't until he floated up on ahead of me that I realized I was breathing very hard. 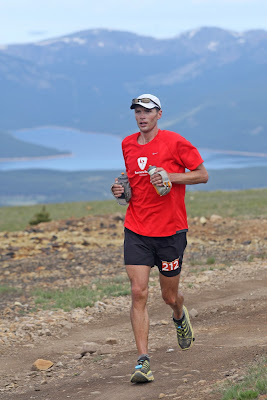 I came into the turn around with the race starting to spiral down.  That amazing feeling in my legs was gone and I knew I was in trouble as the sun usually bakes me on the return trip.

Similar to the marathon, the return trip up Ball was brutal.  I always kept moving, but it was hot now.  Thankfully the clouds poured in as I got to the top and I was savoring every bit of shade they provided.

When I reached Printer Boy inbound (mile 35-ish), the rain began to fall and the wind picked up.  For those that have run Silver Rush before, you know just how hot it gets running up Iowa Gulch.  Not this year!!  It was downright cold and the only way to stay warm was to run.  I still walked a bunch, but I'm sure it was much faster than normal.

Not much else to say about those last 13 miles.  I was drenched and sported goosebumps most of the way.  Running came easy in the cold, wet weather.  I passed a few and got passed by a few.  With a mile or two to go, I looked over my shoulder to see Charles Corfield closing in.  I've never met him, but know he's a phenomenal 55 year old runner.  I got a burst of adrenaline and did what I could to hold him off - crossing the finish line in 8:11:25.