On Saturday, I ran in my third New Hampshire Marathon.  Previously, I ran in 2007 & 2008 and both runs were new PRs for me.  The course is very hilly with about 1850’ of elevation gain, so it's not one most runners typically go for a PR on.  This race is all about the 50 States Marathon Club and Marathon Maniacs.  With New Hampshire on Saturday and the Portland (ME) Marathon on Sunday, many of these folks come in from out of the area to bag two marathons in a weekend. 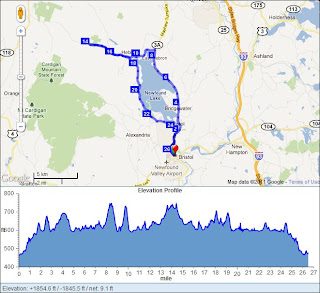 I’m fond of this race for many other reasons than just running well.  The race is small in numbers and hype.  It feels like you're walking into a local 5k with zero hassles of a typical marathon.  It also runs around Newfound Lake, which I’ve been going to ever since I can remember and my parents now live on.  But there's more...

In 2007, I ran it shortly after my brother-in-law, Jim, had surgery for melanoma.  He was a part of the race and our family rallied together to support me during the race, but also Jim as he was about to enter the chemotherapy stage of his treatment.

In 2008, my sister, Jim, and their girls returned to support my second running and it was days after the race that we found out his melanoma had spread throughout his entire body.  The race was the last time we gathered as a family before Jim’s memorial service two months later.  Needless to say, there is a huge emotional piece to this race for me.

This year, I coordinated with my long time friend from high school (Brian) and our families met up for the weekend.  Brian ran the half marathon and rocked it having a solid race running injury free!

In my mind, I was calling this race “a grand experiment” because I was curious to see how my body would respond to a fast marathon attempt only 6 weeks after running Leadville.  Having never run 100 miles before, I wasn’t sure shooting for a quick pace over 26.2 was a wise idea, especially with no specific speed work and almost no road running.

On race day, I awoke to overcast skies and temps in the upper fifties.  My dad gave me a ride into town and dropped me off about 30 minutes early.  With fifteen minutes to the start, the rain began falling and didn’t stop all day.  I’ve only run one other race in the rain (2007 Denver Marathon) and while it’s not the end of the world, I much prefer a dry day.

Once we got started, I found myself in the top 20, which was not a huge feat considering there were only 227 runners.  I was hitting the low to mid sevens and I kept telling myself that it felt comfortable.  The truth was that I had no clue if it was comfortable or not since I hadn’t trained for a specific marathon pace.

At mile three, I had a bug fly into my eye.  Now THAT was uncomfortable!  I couldn’t get it out, so I just kept rolling it around until it didn’t feel like a rock was lodged in there.

At mile six, I ran by my family.  They were hearty spectators braving the rain to cheer me on.  I blew past and gave a few high fives.  I think I was in 15th place around now.  I kept advancing places because I ran with a handheld bottle and skipped all but one aid station.

More hills followed and the miles ticked away.  After mile 11, you begin a long out & back section that gives you a good chance to figure out where you stand.  I entered the turnaround in 12th place.  It wasn't until mile 17 before I made my next move and hit the top ten!  Then began the long stretch of running solo and continuing the loop around the lake.

At mile 20, I passed a spot that I remember so vividly from 2008.  My family was spectating at a friend's condo and Jim had rushed out on their deck as I ran by.  He was the only one out there hootin' & hollerin' for me.  It was bizarre to look up on Saturday and see him there again cheering me along.  Then next thing I knew, he was running along side me!  Oh man, was that moment surreal and sweet.  No, I'm not going crazy at this point.  It just seemed like I could feel his presence more than ever before.  And boy did it make me want to dig deep and finish this thing strong.

All in all the rain did not dampen another fantastic run in New Hampshire.  It was a treat to get to spend time with Brian and his family.  Mom & Dad once again showed strong support and kept me fueled with Dunkin' Donuts coffee all weekend!  I so wish I could have experienced another NH Marathon with my sister and nieces, but my time with Jim was awesome!