Last Saturday was an interesting day...and race.  After a very mild start to fall, winter decided to pokes its head out in a mean way.  Just one week earlier, temps were in the 80's, but on this day, I awoke to rain at 5:30 a.m. that turned to heavy snow about 20 minutes later.  The race websites states, "we race rain or shine."  And now they can include snow to that list. 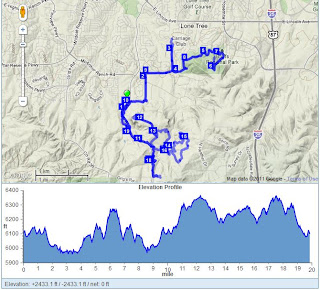 I was feeling pretty good going into the Wildcat Mountain 20 mile trail race.  The soreness from running the NH Marathon the week before had disappeared and I felt ready for a decent effort.  Last year, I ran in the 10 mile version, but when they rolled out the 20 mile option this year, I couldn't resist.

There were about 25 of us that started an hour before the 5 &10 mile races kicked off.  I began with a group of five runners out towards the front.  The lead guy took off like a rocket and I could tell he didn't quite know what he was doing.  These conditions almost demanded a more conservative start as the trail was a mixture of snow, slush, mud, and puddles.

After a mile we turned directly into the wind for a long stretch.  It was biting and I kept asking myself if it was really October 8th.  It felt more like a miserable January day.  We ran an out & back section before heading into the Bluffs Regional Park for a longer out & back.  Up to this point, the course had been marked well and there were several marshals directing us on where to go.  But upon entering the Bluffs, there was an unmarked intersection and the top three guys took a right when they were supposed to go left.  I started to follow, but had a flashback from Lake City and turned around.  Fifth place came up behind me and I told him of their error.  He opted to follow them since he assumed they knew what they were doing.

As I plodded along, I came upon a course marker, so I knew I was heading the right way.  I came across a course marshal out there and told him I thought everyone was taking the wrong turn and he got really flustered about what to do.  Sure enough, about a mile later, all the lead guys start coming at me as they continued their loop around the park.  I got several strange looks, but they just cruised on past.  Then the streams of runners came next.  By the time I hit the turnaround, about 15 runners had passed me going the wrong way.  I'm pretty sure the shortcut they took shaved just over a mile from the course.

At this point, I'm beginning to think I'm in first place and that got me running strong and focused.  It was also the time that my legs started to rebel.  The entire backside of my legs (hamstrings & calves) were as tight and sore as ever.  I'm guessing the marathon effort from a week earlier caught up to me.  But I couldn't slow down now!  I had no idea when I would ever get so lucky to be running in first place again, so I simply couldn't blow it.

The rest of the race was uneventful.  The snow let up a little and the temps got above freezing, but the trail conditions were still poor.  We even had a creek crossing that was about 10 feet wide and a foot deep.  I passed all 15 runners that got ahead of me and almost caught two of the four front runners.  I believe I was fifth to cross the finish line.  2:37:01

The race director was aware of the course mishap and asked me if I ran the correct course.  I said yes, but I honestly have no idea how she is going to figure out who did and who didn't.  They made an announcement that they were going to sort out the issue and announce the results via email, but as of today, nothing has been announced.  I understand their problem, because if they award me first place, they'll have to disqualify a whole bunch of runners.  But if they just leave the results as is, they'll be ignoring the fact that most ran only 19 miles.  Oh well.

This race was fun, but due to the weather, very unorganized.  They also need to figure out how to start the 20 mile race so the front runners don't come up behind the back of the pack 5 and 10 milers.  That part of the course was singletrack and many were walking with headphones on.

The race did make one thing clear to me.  Going hard on back to back weekends is probably not for me.  During the last few miles, my legs felt just as they had during the final miles at Leadville.  They were toast for the rest of the weekend.   Had I just kept it slow and steady on Saturday, I would have been fine.  I'll definitely give this race another go next year as I'm sure they'll have all the bumps smoothed out.  I'll post again when they finally figure out how they're going to release the results.
Posted by Woody at 9:02 PM