Every fall, I wage an internal debate about taking some time away from running to lay low or keep plugging along with training.  And every fall I come to the conclusion that I'm wired for consistency and find great joy in watching small improvements in my running over the years.

I arrived at the same answer this year, but the cold, dark mornings are quite an obstacle to overcome when the alarm goes off.  In particular, the months of November and December are tough for me to train through.  For the last two years, I've had the Bandera 100K to keep me motivated through the end of the year and it works well because that race scares the pants off me.

After last year's DNF at Bandera, I've decided to return yet again and see if I can put together the kind of race I know I can run.  Whether that happens or not, I'm pleased that it has translated into the necessary desire to train.  At the end of October, I set a goal to run a minimum of 5 miles every day in November and top 300 by the end of the month.  I know that's nothing special, but so far so good on keeping the streak alive.

After dropping my folks off at the airport early Friday morning, I hoped to get in the first of two 50K training runs while the ladies of the house hit up Black Friday shopping.  The plan at first was to head to Buffalo Creek, but with the mild weather, I couldn't resist the urge to see if I could get the long miles on the Indian Creek trails.  Without touching the same trail twice, I racked up a 32 mile loop and left some options on the table for next time.


This run was all about time on my feet and building endurance.  I was in no rush and wasn't sure of the exact mileage anyway, so I knew it would be about going with the flow.

First up was running all the "tail" trails (Sharptail, Swallowtail, and Ringtail).

There was a lot of elevation gain on this run (6500') and I just wasn't feeling it on the climbs.  I'm guessing a big part of that was my eating issues.  Or I should say lack of eating.


The only downside of this loop was the two miles of running the dirt road heading out of Roxborough SP.  There was consistent traffic and the dust kicked up was bad.  Instead of coming down the Carpenter Peak trail, you could take the Powerline trail as an alternative and re-connect with Sharptail Ridge, but that would add another 1-2 miles.

What were my takeaways from this run? 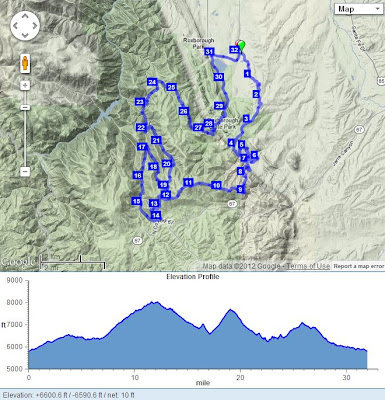