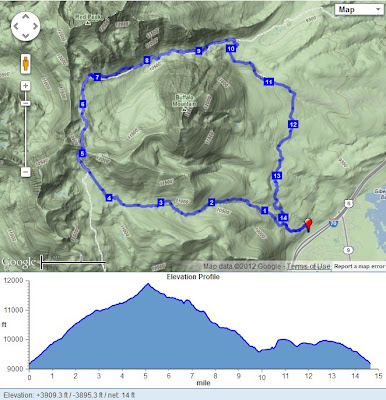 This was my third year attempting to run the Eccles Pass Loop around Buffalo Mountain.  In prior attempts, I either got lost or was thwarted by deep snowpack.  You can read about them here:

We spent a few days around the 4th of July holiday camping at Lake Dillon.  My brother and family came out from Minnesota for some fun in the mountains.  I snuck away early Thursday morning for my Eccles run. This year the snowpack would not be an issue, and I was determined to stay on the right trails!  After biking the three miles to the Meadow Creek trailhead, I began my run by headlamp.  For some reason, I misjudged how long it would take me to get up and over there, so I was ready to roll at 4:40am!

As the sky lightened a bit, I noticed it was quite cloudy.  It had rained the night before, but usually CO mornings start out clear.  I ended up needing my headlamp much longer than expected because it was so dark in the forest. 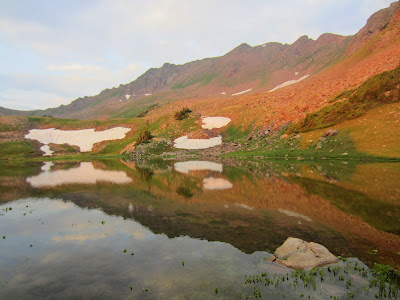 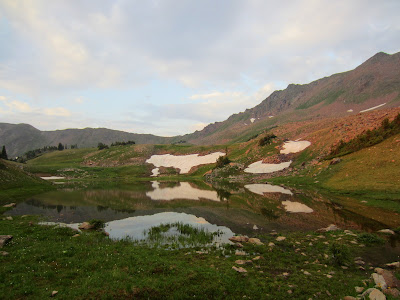 I captured my only wildlife encounter on video.

I had been doing so well on this run that I just knew I'd find a way to screw it up.  I came upon the creek pictured above and the trail went from one side to the other and then continued on.  The only problem was that it faded about 75' after this creek and it was nothing but forest.

I spent about 10 minutes walking back and forth trying to find the trail.  I knew it had to be around there somewhere.  With no such luck, I decided to continue on past where the trail faded in hopes of reconnecting with it somewhere further down the the drainage basin.  What followed was about 45 minutes of total bushwhacking through the forest on the side of the mountain.

Yes, I eventually got back on the trail, but I had wasted precious time and now had to fly in order to get back to the campsite and meet the family for a hike.  The final six miles had me running full force and if you know that trail, there are a few really tough & technical spots.  I was frustrated, so the hard running actually came easy.

I'm really glad to finally knock off this loop, but wish it ended better.  I'm now thinking that running it in the counterclockwise direction is the way to go.  Since we camp at Lake Dillon almost every year, I'm sure I'll get another opportunity to do it right!
Posted by Woody at 9:42 PM