I was starting my ascent of the Three Sisters and I could feel a slight change in the air.  The humidity that had kept me drenched all day was starting to break and a gentle breeze was blowing.  I was hiking the Sisters, but something else was also changing.  The fire inside was returning.  I began plowing through the bouncing patches of leg slicing Sotul and my renewed focus was set on the Cross Roads aid station two miles away.

As I approached the race's ten hour mark, I'd had enough and was ready to declare an end to the previous six hours of mediocrity.  I can't explain what got the kick going, but whatever the spark, I'm glad it was lit.  I stopped briefly at the aid station, swapped my wet shirt for a dry one, and began the final 9 mile leg over Lucky Peak, Cairns Climb, and Boyles Bump en route to the finish.  I ran the best of the day during this stretch and I couldn't have been happier to end on a positive note.

The Bandera 100K once again proved to be an elusive goal.  I thought for sure I'd dialed this one in and would nail it.  I should have known better.  You can't tame an ultra no matter how many times you run it.  There are too many wild, unpredictable, and moving parts.  A runner simply has little control.  What a runner can control is between their ears and how that gray matter will respond as the external circumstances unfold.

When I walked out the door of my motel room at 5:50am, I walked right into a rainforest.  Everything was dripping wet as fog and drizzle enveloped all surroundings.  It was already 65 degrees with 100% humidity.  My thoughts were on the positive side thinking about the cloud cover this would provide as the temps rose to the forecasted 75 degrees.  I didn't think at all about the trail conditions.

When the stampede race began, it only took a few moments before the realization set in that this race was going to leave me looking like I ran a mud run.  I could feel the clods leeching on to my shoes and then releasing into the air before the crash landing on my calves.  The front runners were depositing much of the mud from their shoes on the rocks that the rest of us would enjoy sliding on as we descended Bandera's steep hills.


I coped well for the first few hours.  My goal was to remain relaxed during the first loop and I certainly accomplished a slower pace. Unfortunately the slower pace was taxing with the extra poundage clinging to the bottom of my shoes.  After wearing my Hokas last year, I couldn't think of a better shoe for the Bandera rocks.  I can now also say they're about the worst shoe one could wear for the Bandera mud.  All the extra surface area sucked up whatever brown stuff it encountered and at times it looked like someone strapped leather footballs to my feet.


I came into the turnaround right at the 5 hour mark.  My mental state had already been swirling down the toilet bowl for an hour or two and I sat down to regroup for lap #2.  That lasted about a minute as I couldn't think of any mental gymnastics to make the situation better, so I got up and started running.

Mile after mile, I continued in an unexceptional manner.  People were passing me regularly and I wished them well and admired the determined look on their faces and strong form as they ran.  I attempted to chase them, but couldn't get out of second gear.  I thought about all of the people pulling for me, that I was competing in a national championship race, all the training I did to prepare, and none of it mattered.  There was nothing physically wrong with me.  I had simply settled for a mediocre race as the hours went by.

Finally, things changed as I described above.  They always do if you can persevere long enough.  This rough patch just happened to be an incredibly long one.  I was flying along as my anger drove me to run up and over the hills.  I had wanted to finish before sunset and now I was in the dark navigating technical trails by headlamp.  That got me more mad and so I ran harder.  It's funny how anger can morph into joy when it produces positive results.  I felt free as the scales of my defeated attitude were peeling off.

Crossing the finish line in 11:45 came with a variety of emotions.  I had finished well and no longer had a DNF hanging over my head.  But I couldn't shake the thought of the missed opportunity.  I've had many races where I've crossed that line and know I left everything in me out on the course.  This wasn't one of those races and an honest gut check has revealed that the problem was allowing myself to run too long with a mental flat tire.  No other excuse fits since I fueled well and my body was experiencing nothing more than normal fatigue.

So I've marked January 11, 2014 on my calendar, and I know that something has to change in my approach and execution of this race.  I'm excited to figure out what that will be and try again.

Now to bring it back to a lighter side, I thought this report wouldn't be complete without an amazing picture taken of the night sky.

I did mention that I was staying at a motel, right?

And I have a history of staying in shady places in Bandera, right?

Well check out what was above my bed!  Oh yeah!  Mix that black light with some glow in the dark paint splattered on the ceiling and well.... 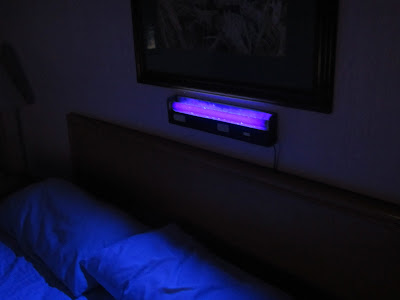 No matter what happens during a race, I do recognize that I'm one of the luckiest people alive to have the opportunity to run trails for almost 12 hours.  It is a gift I try to never take for granted.  Enjoy this picture of one of our fine soldiers, Eduard Lychik.  I didn't meet him or even see him out on the course, but I wish I did.  He rocked the 25K and brought an immense dose of inspiration to all that witnessed his race.

Once again, I thank Joe & Joyce and all the Tejas Trails volunteers for putting on such a fine race.  My wife asks me why I go back year after year.  Bandera extracts the same feelings out of me as Leadville.  The town, the community of runners, the Texas hospitality, the tough as nails course, and Joe & Joyce.  For almost 24 straight hours, Joe waits on the other side of the finish line for each runner to cross it.  And when you do, you're met with a big handshake and a buckle.  Awesome.

If you're curious how the race played out up front, Trail Runner Mag featured this article, Muddy Times At Bandera.  Sage Canaday?  Wow, is all I can say.
Posted by Woody at 8:50 PM