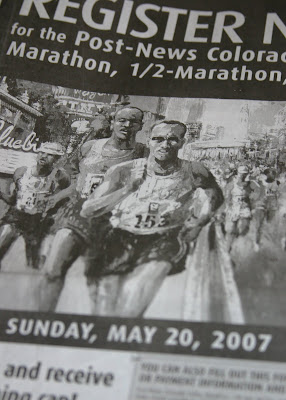 About a year ago, I was thumbing through the newspaper when I came across an ad similar to the one shown above. That was the seed that inspired me to sign up for the Colorado Colfax half marathon last May. That race led to me running in the Denver half marathon in October.

Well, many of you also remember my complaining after each race and several comments to the tune of I would never do it again. I also said I would never...never run in a full marathon. Turns out my statement about not running in a full marathon is similar to Nick Sabin's claim that he would not leave Miami. That's right. I am going to shoot for the 26.2 miles this May. I've got lots of time before May, but that will be much needed to prepare.

This year's Colorado Colfax is going to be a lot of fun because two friends are running the half...James & Kacey are going for it. Any other takers out there?
Posted by Woody at 2:19 PM No comments: