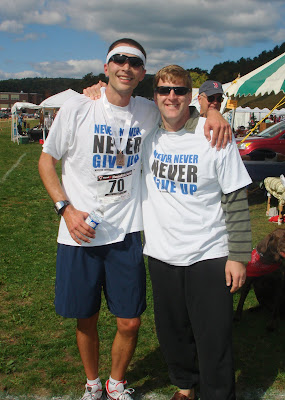 Continuing where I left of yesterday...

JIM: He was a whistle-blowing, cowbell ringing, bag of lymph node fluid carrying machine! Pretty cool that he had lymph node surgery one week and was out on the course cheering for me the next. I've thought a lot about his melanoma. It's very easy for me to think about "what if it was me". I don't believe there is a manual out there that explains how to process all the thoughts, feelings, emotions & ramifications that come with finding out your have cancer. If it was me, I think I would want to handle it the same way I have seen Jim take it on.

It reminds of the "David & Goliath" story from the Bible. David was an optimist. There is no human explanation why, as a young teenager, David was able to take down a giant who could have crushed him in an instant. Jim is an optimist. He knows the seriousness and difficulties that lie ahead, but also knows that his optimism flows from a Source of strength, resources & power that is far beyond human explanation. I like that about him. God is good.

PS: I would be remiss not to thank Tanya & Anne for hanging at home and taking care of the kids so the rest of us could share in this experience. Thank you!
Posted by Woody at 2:54 PM