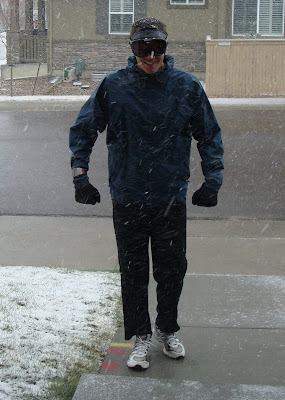 This winter I've been in an informal email group with three friends (Scott, James & Brian) who are all running marathons in 2009. It's been fun to throw questions out to the group, check in on how training is going, offer encouragement after crummy runs, etc.

One promise I made to the group was that I was going to wear ski goggles the next time I went for a run in the snow. My previous two experiences this winter were not pleasant. Especially when the wind is whipping the snow into your eyeballs. The only thing you can do is run with your head straight down, which gets annoying after several miles.

We were supposed to get a foot of snow on Saturday, but when we awoke, we had nothing. It snowed a bit, but I think we maxed out at a half an inch. So I went running...and fulfilled my vow to wear goggles. I definitely did not get any style points, but it worked like a charm. Now I just need to invent goggles with wiper blades & defrosters on the front so the snow and ice won't build up!
Posted by Woody at 7:31 PM