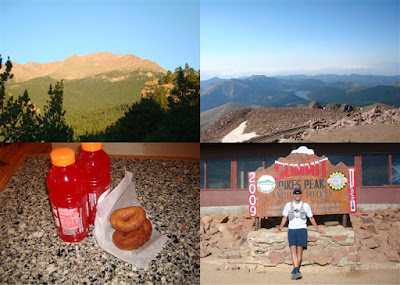 Last weekend, I had a slight change of plans and decided to go for a training run/hike up Pikes to the summit. Previously, my plan was to wait until the race in order to make hitting the peak that much more memorable. The reasons for making a summit attempt before the race began piling up over the last few weeks.

* On my previous training run to Barr Camp, I chatted with a guy who had run several PPM's. He strongly recommended hiking the entire trail once so I would be familiar with it on race day.

* I needed at least one training run that involved me being on my feet for 5-6 hours. That would help me get used to how long I'll be on my feet on race day. Who am I kidding? It would be a miracle if I broke 6 hours during the PPM.

* I found out the marathon turnaround point is actually about 50 feet from the summit. There's no way I was going to run up this mountain and head back down without standing on the true top. I suppose I could have run past the turnaround and gone up the last 50 feet, but then I'd have issues detailed in my next point.

* On previous 14er climbs, one of my favorite parts is enjoying a nice, long rest on top. I love taking in the views from every direction and soaking in the reward of the climb. I know that wouldn't have happened during the race. I'd be too concerned with the ticking clock and be anxious to start the descent.

* And my last reason...there's a restaurant/gift shop on the summit for those that choose to drive up or take the Cog railway. I keep hearing about these "world famous" high altitude donuts they make up there. I wanted to have a chance to try one. See more on this below...

I started at 5:00 am and needed a headlamp for the first mile or so. I was not alone on the trail. I had to pass about 5 groups of hikers in that mile. I later bumped into a couple that had started hiking at 2:30 am! The ascent was fun and about as difficult as I had expected. I arrived at the summit around 8:30 am.

Let's get back to those donuts. I entered the Summit House restaurant and bought my two treats. What a tremendous disappointment! I could only choke down one and what a grease bomb it was. I tossed the second. I wish I had read this FAQ from some guy's website who regularly climbs the peak (before I ate):

Q. What's up with the donuts?
A. I wish I knew. People always told me that if I ever go to the top of Pikes Peak, I absolutely MUST eat the donuts. After eating (part of) one, I was convinced that these people were playing a cruel, practical joke. When I tried a Peak donut, I noticed a distinct trace of bratwurst flavor which, incidentally, they also sell at the Summit House. I couldn't get that experience out of my head for weeks afterwards.

With a slight stomach ache, I made my way outside for the descent. It was brutal. About a mile in, my legs were hurtin' and I was discouraged by how much further I had to go. I tried to jog as much as I could, but eventually that became impossible during that last couple miles. It also got very hot on the descent and of course I ran out of Gatorade in my pack with two miles to go. Two long miles! Despite being very dehydrated and having to walk down the final hill backwards (yes, my legs refused to walk the normal way), I was glad I made it all the way up and down experiencing every step of the Barr Trail.

The race is in 23 days. I'll need to be ready to go a few more miles than I went on Saturday. I think I'm as nervous & excited as I've ever been for a race. Pikes is an amazing mountain. I've been staring at it for almost 4 years...wondering what it must be like to stand on top. Now I know. What a treat it was to climb.
Posted by Woody at 7:54 PM