The PPM is here! 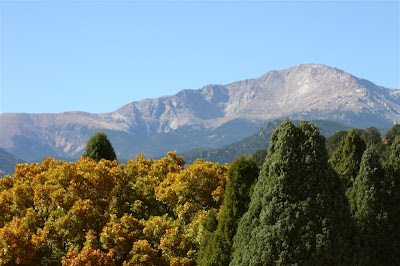 This Sunday at 7am MDT, the shotgun will sound and I'll be joining 841 other marathoners who are crazy enough to try to run up and down Pikes Peak. After about 10 miles, I'll come out of the trees and make my way up the eastern face you see above. If all goes well, I'll have enough left in the legs to turnaround and begin the 13 mile descent back to Manitou. I guess I don't really have a choice!

In preparing for Pikes, it's been fun for me to learn some interesting facts about the peak & race. Some of those tidbits are below.

* This year the PPM is celebrating 50 years of women competing in marathons. Not that long ago, women were banned from marathoning. I read once that race directors thought that if a woman ran a marathon, her uterus might fall out! Well in 1959, Arlene Pieper ran the entire PPM and became the first woman to complete a marathon in the United States. Glad she picked an easy one! Click on this link to read more about her stroll up the peak.

* The lyrics for the song "America the Beautiful" by Katharine Lee Bates were started as she stood atop Pikes in 1893.

* Matt Carpenter, whom I wrote about when I ran in the Mt. Evans Ascent, will be defending his title. He's won the PPM nine times and is the current course record holder. Do you know what the course record is?? 3:16:39. Incredible.

* The air on the summit contains only 60% of the oxygen available at sea level. Race rules state that you are disqualified if you're caught taking oxygen during the race!

* 48% of the runners are from Colorado. The next largest percentages comes from Texas (9%) & California (4%). 43 other states are represented.

* Most "flatlanders" will arrive in CO the day before the race. The preferred method of avoiding altitude sickness is to arrive and begin your journey up as soon as possible.

* The average age of the runners in the PPM is 43. The oldest registered runner is 80. He's a "doubler" as he's running in the marathon AND the Ascent the day before.

* Only 34% of marathoners are attempting the PPM for the first time. That means 551 runners have done this at least once before. One runner is going for his 44th PPM!

* The average marathon finishing time for males in 2008 was 7hr10min. I'm hoping to finish somewhere in the 6hr to 6hr30min range.

* Taken from Wikipedia - Some have pursued oddball feats on the Barr trail (12 miles one way), such as dribbling a soccer ball or walking backwards to the top. In 1929 Bill Williams of Rio Hondo, Texas, pushed a peanut to the summit with his nose over the course of three weeks.

Some may think I'm crazy for wanting to run this race, but clearly there are those with much grander aspiration on the peak than I. Check back Monday for a race report.
Posted by Woody at 7:57 PM