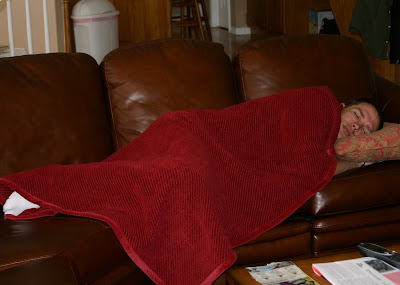 Instead of posting a picture of me running (okay, actually we don't have any)...I thought you might rather see Tanya's snapshot of the post race festivities.

After two hours and forty-six minutes of running, I crossed the finish line...made my way home...and then found this comfy position to recuperate.

Let's back up a bit. Fortunately, the snow forecasted for the morning stayed out East, so there was only an inch on the ground by race time. The first 4 miles were not much fun because although there was only an inch of snow on the ground, there was a thick layer of ice on the road. The sun was trying to poke through the clouds at the beginning, so it was only a matter of time before it melted. About an hour into the race, the road were all clear. The biggest challenge of the day was not the ice, but the wind. It was crazy. At times I felt like I wasn’t moving forward at all.