I could have titled this post "How not to taper for a race," but I'll just leave it as is and tell you about my bonehead experience "running" the dunes.

We spent the holiday weekend at the Great Sand Dunes National Park and I felt no pressure whatsoever to run.  I wanted to go into the Golden Gate Dirty Thirty next weekend well rested, so I figured a hike of the dunes would be enough to satisfy my need to stretch the legs.

It had been a very busy week prior to leaving, so I spent no time at all researching the dunes, learning the do's & don'ts, or figuring out where I could get in a hike.  If I gave reading the park guide five minutes of my time, I could have learned a tip or two that would have saved me some anguish.

After settling in at Medano Creek around noon and eating lunch, the girls began to play in the water.  I saw my opportunity to slip away for the short hike to the top of the dunes.  After crossing the creek, I had a couple football fields worth of flat and somewhat rocky sand to walk before the climb began.  If I even had a 15 watt bulb burning in my head, I'd have noticed that walking barefoot wasn't very comfortable. 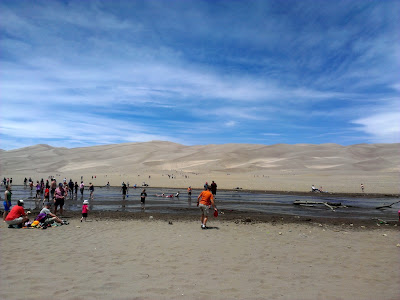 As I began to ascend, the sheer force of the wind pretty much distracted me from all other things.  I'm sure it was a normal windy day at the dunes, but if you haven't experienced pure sandblasting on your legs, you're in for a fun and somewhat painful sensation.  The higher you got, the stronger the wind.  Any ridge of a dune was particularly gusty. 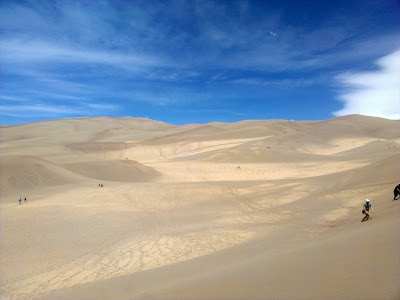 The video quality stinks, but you can catch the drift (pun intended) of what a hike up the dunes entailed.

About halfway up, I began to notice just how hot the sand was.  I felt like I was a frog sitting in a pot of water that was slowly coming to a boil.  Eventually the heat became so toasty, that a "what the heck" moment happened and I looked down at my beet red feet.  Stubbornness and summit fever prevailed. 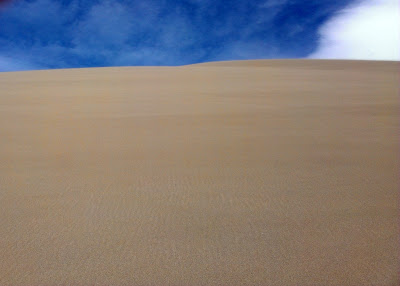 The steep climbs really were slow going.  Another underestimation on my part. 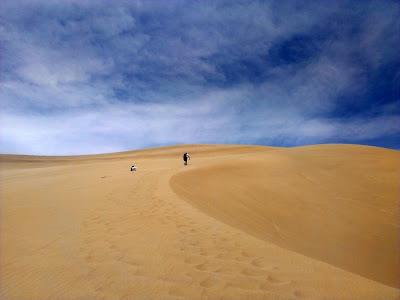 There were only a few people up this high.  All of them had shoes on.  I think the guy above also had summit fever as he left his wife to die so he could continue on.  Nah, she was done and wanted to rest. 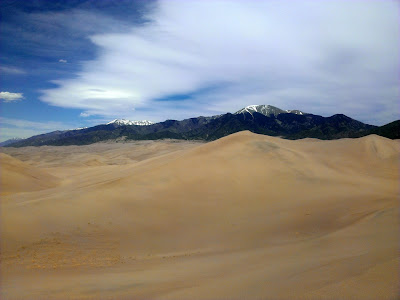 When I hit the top ridge, I got a sweet view into the rest of the park.  I still had a few hundred feet to go along the ridge to get to the official "summit," but my feet were wrecked and I could feel the blood in between my toes.  I could also see a few people over there and their entire bodies were getting blasted by the wind and sand.  Time to get off this awful ant hill.  I ran down much of it just so I could minimize the time spent in the hot sand.

I hobbled across the flat, rocky stretch and soaked my feet in the creek for a good 15 minutes.  After getting them cleaned up, I took a few pictures since I'm not flexible enough to see the bottoms of my feet otherwise.  I thought for sure I did more damage than what I found.  And thankfully, they're healing up nicely. 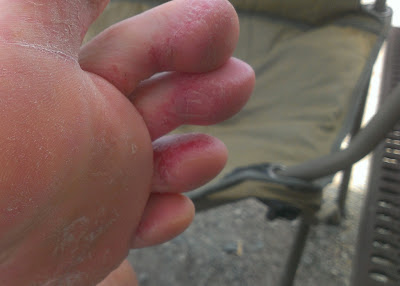 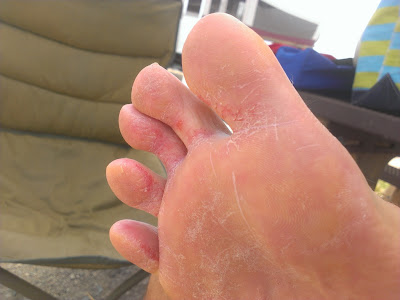 Back at our campsite at San Luis Lakes State Park - oh wait, they removed the word "Lakes" from the name because they let them all dry up.  Check out their website for the water views we were expecting.

Instead the lake is a dust bowl filled with fish bones.  When the wind starts cranking, there are constant "tornados" that form from the white sand/dust in the lake.  See below.

While the Sand Dunes were simply amazing to see, they were not kind to me.  Maybe if I had read this tidbit of info in the park guide, I would've had a more positive experience.

"On summer afternoons, the sand surface can reach 140°F (60° C). Bring closed shoes, and be careful with your pets’ feet. Hike the dunes early morning or evening during summer."

Despite not being a fan of the desert-like scene of the San Luis Valley, we truly had a great weekend and I'll never get tired of sitting around a campfire and watching a view develop like the one below over the Sangre de Christos! 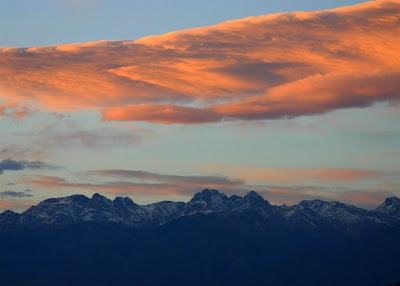