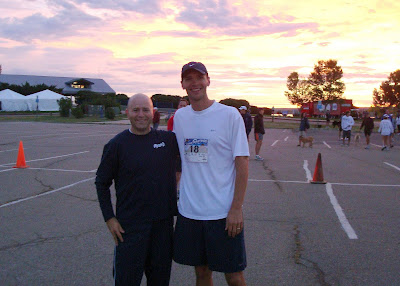 The Boulder Marathon is in the books. It started with meeting Scott at 4:45am to begin our trek up to Boulder. We arrived while it was still dark out, but the sun made it's appearance shortly thereafter and the marathon began at 7am. Scott ran in the 1/2 marathon and was kind enough to drive us up there even though it meant he had to wait around an hour before the 1/2 started at 8am.

Those clouds you see in the background were a huge bonus for the day. They stayed around for several hours and kept the sun away while the air was perfect for running. The marathon went well. I didn't know this course at all, but enjoyed the run through the backroads of Boulder. It was very scenic as we ran on dirt roads through farmlands that featured the mountains is a backdrop.

All was going well until I hit a four mile stretch of uphill running around mile 17. It was much steeper and longer than I had anticipated. The end result was I burned through all my reserve energy and my pace drastically dropped. The last 5 miles were slow going. Fortunately, I had built up a nice cushion so I was still able to beat my previous marathon best time by about a minute. I came across the finish at 3:27:56.

Scott also had a personal record for the half. He completed it in 1:37:28. He's going to give the Denver Half Marathon a go in about a month and I predict he's going to set another PR! He also gets extra props for going straight to the Broncos game after the race...without a shower!
Posted by Woody at 4:30 PM