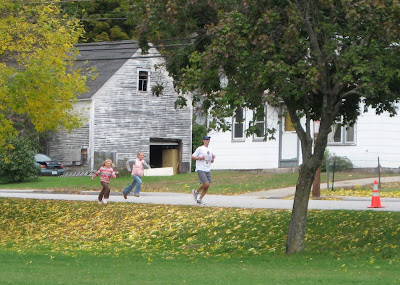 On Saturday morning, I ran in the New Hampshire Marathon. This race is small & cozy. So many aspects of the race make you feel like you're stepping into a Norman Rockwell painting. The weather was just right for running (cold & cloudy) and my family was once again an amazing support along the course. Here are some highlights...and one big lowlight:

- The local high school band was all setup at the start playing some rousing songs!

- The race director ascended a ladder to yell instructions to the runners lined up at the start. When he raised the pistol for the actual start, he pulled the trigger and we heard nothing but a faint "click". After a few mild grumblings, he adjusted the pistol and produced the desired "BANG"!

- The first water station was sponsored by the American Legion. There were eight veterans in their seventies & eighties...all dressed in military uniforms...standing in line with cups of water & Gatorade for the runners. To add to the scene was loud "bugle" music playing from a CD player.

- About 45 minutes in, I heard someone on a bike coming up behind me. It was a man in his seventies with a bright red jacket. The words "Marathon Coach" were printed on the back. He told me, "I'm out here to encouraged you all along. I've done 76 of these, so I know a little about what you're going through!" He rode by me several more times shouting things like "Great Form" and "You're looking strong". He rocked!

- All throughout the course I was treated to beautiful leaves, chimneys with smoke puffing out, and a cool crisp breeze...there was no mistaking Fall was all around.

- When I hit the critical miles around 18-22, I overcame some hills and realized I still had some gas (the good "energy" kind) in the tank! My family was stationed at mile 21 and gave me a HUGE, much needed boost.

- When I arrived at the finish, my nieces Lauren & Dana, ran the last tenth of mile with me! Little Zoe tried to join them, but couldn't keep up!

Now for the big lowlight: