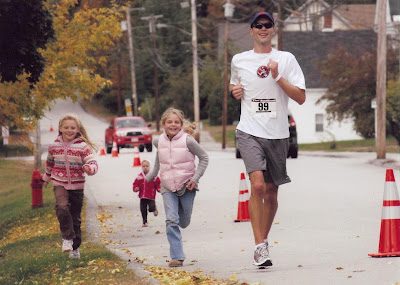 This shot is my favorite running picture of all. It was taken by the course photographer right at the end of the NH Marathon. I posted a similar picture last October, but it didn't have Zoe it in, and it didn't catch the expressions on our faces. I think I can make out a look of frustration on Zoe's face...she tried really hard to keep up.

Switching gears...this May I'm going to give trying to qualify for the Boston Marathon another shot. I'm going to run in the Colorado Marathon up in Fort Collins. I'm just over 10 weeks through a different 18 week training program that is kicking my butt....in a good way. Training can be a bit stressful at points. For an example, read on...

The other night I had a dream that my Boston qualifying race had come. For some reason it wasn't the CO Marathon, but some other race and I have no idea where it was. Anyway, for some reason I was very late getting to it. When I arrived, I absent-mindedly put the envelope containing my race bib and timing chip aside and just hopped into the race. Boy, did I run a good time. I was approaching the finish and happily looked at my watch and knew I was about to qualify. For some reason this was also the time I realized that without a timing chip, I would not receive an official time and thus my effort was worthless.

Most nights I sleep quite peacefully. This particular night, I woke up breathing heavy, panicking, heart-broken, angry for not wearing my chip...and with a light glaze of sweat covering me. You better believe that timing chip will be on securely on May 3rd!
Posted by Woody at 7:23 PM