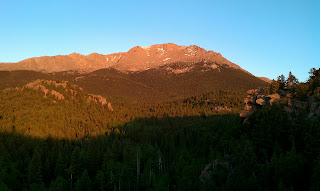 I made it down to Pikes Peak on Saturday. It felt so good to be on the Barr Trail again. It's only an hour away, but I wish it was closer. Instead of carrying a camera, I decided to have my new HTC Evo 4G handy to capture a few videos. I like videos because they provide a different experience that still pics can't create...like hearing me sucking wind in almost all of them!
After a 2:30 wake up, I was on the road at 3:00 and standing in downtown Manitou at the start line of the PPM at 4:04. My loose plan was to cover the entire PPM course as long as the snowfields up high didn't present any problems. I was looking forward to testing my training up to this point and continuing to refine my fueling strategies (Gu, S-caps, water, food).
Starting in the dark wasn't that bad. I had a headlamp and I'm getting more comfortable with running in the dark, especially when I know the trail. It wasn't all that long before dawn was upon me and I could see just fine.
I ran almost the whole way to Barr Camp. I had hoped to fill up my pack with water there. Unfortunately, I found out they don't have any "free" water unless you have a filter to pump it from the stream. Oops. My first mistake of the day. I rented one for $3 from the BC caretakers, Neal and Teresa, since I wasn't excited about the prospects being without water above treeline.
I ran about another mile after Barr Camp and then started alternating between walking and running. When I got to treeline/A-Frame, I switched to all hiking. I was making great time and didn't feel the urge to push it any harder. I also wanted to save my legs for the descent, which has been my nemesis on my two round trippers last year.
I encountered a few small snowfields, but nothing that hikers had not already packed down. I had to scramble off the trail once because there was a huge snowfield blocking the trail and I could see how hikers had cut the switchback to resume the trail a little higher. I don't normally like to do that, but that snowfield looked to me like an avalanche just waiting to happen.

Made it to the summit in about 3:34, which was about 12 minutes slower than my PPM time last year. It was very windy and cold, so I went into the warm Summit House to escape the chill and eat my sandwich. It's always fun to watch the tourists up there that just got out of their cars or off the train.

Started down after about a 15 minute rest. As I mentioned before, the descent has always been tough on me. I typically bonk at Barr Camp and the pounding on my quads gets to be unbearable right around the same time. I'm not sure what happened, but I felt great today! I blew through Barr Camp and was hitting 8:45 miles on the flatter section. I can only credit my increased mileage this Spring and fueling strategies. I suddenly realized I was going to easily beat my PPM time (5:47) if I kept this pace up. All was great until....the fall.
With 3.5 miles to go, I was flying down the trail right at the spot where a small trail from the Incline connects with Barr. I kicked a rock and went down. Just think of a baseball game with someone stealing second base and doing a head first slide...except I was on rock and gravel. I have always been cautious about falls, but I think I got a little overconfident today. This was my first fall and certainly could have been much worse if I hit bigger rocks. Instead the gravel just shredded my palms, left knee, and right thigh (I'll spare you the pics and video on this one). I popped up to survey the damage and realized some major cleanup was needed. I had to sit on the side of the trail for about 10 minutes while I rinsed the cuts and pulled out the plethora of bandages from my pack.
I was feeling defeated, but did what we all teach our kids to try and do. Pick yourself up, shake it off, and keep going. I finished running the W's and Ruxton, but was a little slower as another fall would have surely done me in. 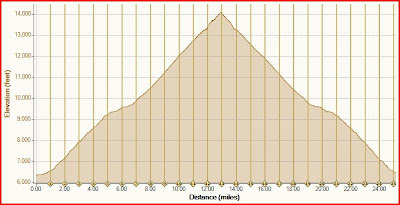 Time to wrap it up here. Despite the fall, it was an incredible day of running. 26 miles with over 7800' of vertical in 5:47 (my exact PPM time from last year...weird). I love looking at the elevation profile from a day on Pikes. It makes the peak look much scarier than it really is. I'm quite sure the next time I'll be getting down there is on August 22 for the REAL PPM!
Posted by Woody at 4:48 PM