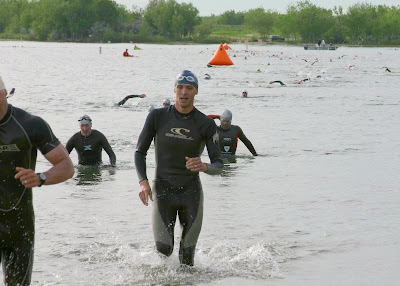 My long awaited dash through the water, roads, and trails of Cherry Creek State Park is over. I have avoided the dreaded three event activity for years, but thanks to the encouragement from my soon to be Ironman friend James, I can now say I'm a triathlete! The Tri the Creek sprint triathlon yesterday was a perfect race for my first. I finished in 1:24:48 which got me 8th (out of 28) in my age group and 32nd overall.

First off, to all those who have done a triathlon of any kind, my hat goes off to you! Going from one event to the next is very, very challenging. I'll lay out the play by play.

I felt relatively prepared for the swim. I had gotten in the pool about 5 times since Boston. I was comfortable swimming 800 meters...in a pool. Stick me in 63 degree open water with a wetsuit and I was nervous to say the least. When my wave started at 7:34 am, we charged the water from the beach and started the 100 meter swim to the first of five buoys. I don't know what happened (probably a mixture of adrenaline & fear), but I couldn't put my face in the water without immediately needing a breath of air. So I had to swim freestyle with my face out...a glorified doggie paddle and not really an efficient or fast stroke.

After the first buoy, I managed to settle down and got into a better rhythm with my normal freestyle. I can tell you that nineteen and a half minutes of swimming felt like 2 hours. Dizzy and already exhausted I jogged to the transition area while trying to peel my wetsuit off. 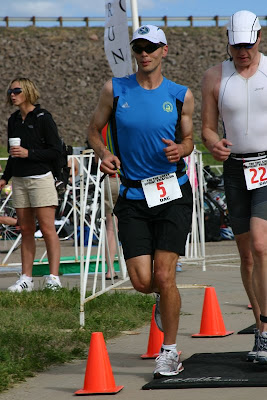 James had let me borrow his 20+ year old road bike since I really didn't want to do this with my mountain bike. It was perfect and I'm grateful for his loaner. Although, I was a little intimidated by the guys and gals sporting their super slick, Lance Armstrong, Tour de France type bikes. Prior to the race, I had only ridden the bike two times. This was a big mistake. I kept up a good speed, but my legs were burning about 5-6 miles in. I locked in with two other riders and was able to hang with them for the second half of the ride. Getting off the bike was hilarious. Wobble, wobble, wobble went my legs.

Alright, this was supposed to be my bread and butter right? Ha! Those legs needed a good half mile to work out the wobblies. I had no idea what pace I was running, but I knew I was breathing about as hard as I ever have during any run. But why did I feel so slow? That's where the compounding effect of the three events comes in. Even though I was sucking air in a hyper-ventilating manner, I learned at the end, I was hitting about a 6:50 pace. 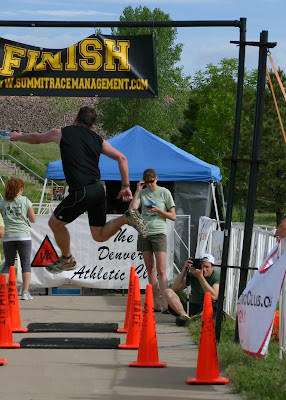 This is James at the finish. He baffles me with how he can do these signature jumps at the end of endurance events. I refused to try another jump after my Boston debacle in April! Well, he rocked a 1:18 in the tri and placed 3rd in his age group and 9th overall! Did I mentioned he road the last two miles of the bike on a tire that was steadily leaking air! I can't wait to see him tear it up in Boulder come August.
Check him out three weeks ago at the end of the CO Colfax 1/2 marathon...in which he PR'd! Love it!
Well, the Tri is over and I'm zeroing my focus on training for Silver Rush...only 6 weeks away!
Thanks James for encouraging me towards a Tri. Who knows if I'll get back out there for another, but I appreciate the experience I had with you! 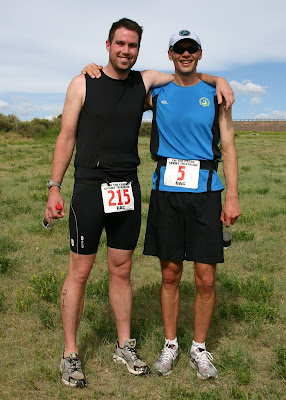