On Saturday, Tanya & I ran in the Wildcat Mountain 10 Mile Trail Race here in HR. We didn't run the race together, but instead did our own thing and met up at the finish line. We did sneak in a high five as we passed each other on the out & back stretch.
Tanya ran a spectacular first trail race finishing in 1:45. She really enjoyed the trail scene, but would have liked just a little more "crowd support" out there! After the race she won a $55 Brooks long sleeve running shirt in a raffle. That made up for the lack of finishers medal, which is pretty much a requirement for any race she runs.

The 10 mile course was one that I had run about once a week all summer long. I've never raced on a "home course", so I was curious to see how much that would help to run a smart and solid race. I think it really helped. I decided to push it quite hard and see if I could nail a top ten finish. If you've followed my running for any length of time, you know that is something I typically don't shoot for.
When the race started, I was last in a pack of ten runners at the front. The first two miles were uphill and my heart rate was off the charts. My first split was a 6:46. I then made my move to pass two runners and settled into a slower pace as we continued to climb. The second was a 7:13. Once things flattened out a bit, I was able to notch two more sub-7 min. miles before starting another mile long climb. During this stretch the 6th place runner kept adding to his lead with no sign of slowing. Fortunately, the two guys behind me dropped back far enough that I couldn't see them anymore.
That's the way the rest of the race went. No passing, and no being passed. I crossed the finish line in 1:10, which was good for 7th place. For the first time ever, I placed 3rd in my age group (30-39) and scored a medal!
This race was satisfying on many levels. It was fun to get out and try to run fast. After several races where "slow and steady" ruled the day, it felt good to open it up and get the heart pumping. I haven't run a sustained 7:00 pace since April. I appreciated the advantage of knowing every single twist and turn in the trail. I knew when to hold back a bit, and when to just let go. 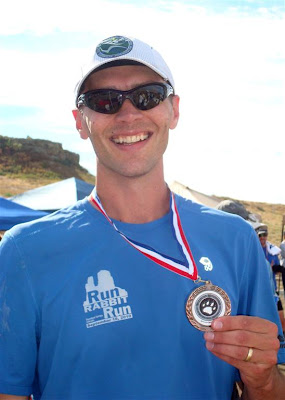 On Sunday, I ventured up to Evergreen with Patrick to meet up with Jim & Steve for a run up Bergen Peak. Jim lives just steps from a connector trail, so we got going quickly and motored up at a good clip. My legs were feeling quite heavy from the race on Saturday, but good enough to keep up with everyone. While on the summit, we experience our first snowflakes of the season. I was on Bergen with Patrick back in June when the summit was in a cloud. This time the clouds were broken up enough to afford scenic views of a snow dusted Mt. Evans. We ended up covering 12 miles in 2:03.
Thanks for hosting the run (and snacks) Jim!
Posted by Woody at 9:20 PM