We spent Memorial Day weekend camping down in Manitou Springs.  Plans got thrown together last minute for a long run following the Ponderous Posterior 50k course in a clockwise fashion.  I met up with Jim P, Joe Z, Dave ?, and Troy H to begin our adventure.  Joe, Dave, and Troy decided to make an assault on the summit, so about an hour or so in, they kept heading up the Barr Trail, while Jim & I took what we thought was the connector trail over to Waldo Canyon.

Something didn't seem right.  We consulted the "zoomed out" map on several occasions and decided to just keep going.  We came to a junction with the Heizer Trail being the logical choice.  We thought it would only be a matter of time plodding north before we hit US-24.  After passing through Hurricane Canyon and clipping the edge of the Manitou Reservoir, we popped out at US-24...in Cascade!  A good two miles west of Waldo Canyon.

After chatting with a dude at "The Wines of Colorado", we made our plan and were soon running down the shoulder of westbound 24.  Not the safest thing to do, but it was our only option to get back to Waldo.

By the time we reached the WC trailhead, it was getting hot out and we were already 17 miles into the run.  The canyon climbs a whole bunch over three miles and it was fairly crowded, or at least it felt that way after not encountering anyone on our jaunt through Hurricane Canyon.  The plan was to depart WC and take a trail in Williams Canyon up to Rampart Range road before heading back to town.  That plan changed when were were presented with the option of just running down Williams Canyon and calling it a day with 25 miles in the bank.  Yeah, we chose that one.

The best part of the day came when we returned to Jim's car and he broke out two Upslope IPA's.  Sitting on the ground...under the cover of shade...with a nice breeze...it doesn't get much better!  Thanks for the great run Jim! 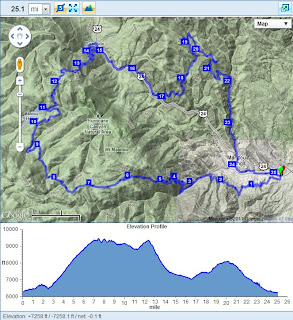