Last night I did not sleep well at all. Mosquitoes serenading me, Dillon fireworks heard in the distance, restless legs, and rain off & on all night – right up until 4:10am. My alarm went off at 4:45 again, but I wasn’t motivated today. I wanted to get out of the crummy place I was in, but I had 4 more miles of it. Standard morning routine except I had to deal with a wet rain fly. I also skipped the oatmeal and ate just poptarts and donuts. Finally I was off and actually feeling pretty good once back on the trail.

Day 3 is when I began talking out loud to myself. “What if I didn't race in 2014?” “Should I stop at Copper and drive home?” “If we don’t need dump trucks of money to survive, why do we seek so much of it?” “Can I see all the ways around me that God has provided?”  I loved the time hiking solo provided to dwell on a question and poke at it from different angles.


I arrived at Breck and crossed the road to begin segment 7. The Ten Mile Range loomed large. 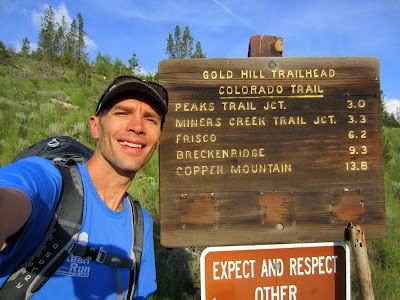 Two older guys hopped on the trail in front of me and I caught up to them 1-2 miles later. They were retired from Oklahoma City. One of them was wearing a San Juan Solstice 50 shirt and I found out he had run Leadville five times and going for his 6th this August! They were slackpacking as their wives brought their big packs on ahead when it made sense. I hiked with them for several miles before the big climb to the top of the Ten Mile range began. Knowing I wanted to hike it fast with the rapidly threatening clouds (at 9am!) I said farewell and took off! 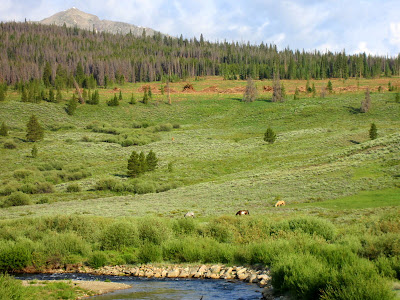 Not more than 10 minutes later, the cold wind and rain let loose! I stopped to cover my pack and tie my rain jacket around my waist and then I kept trucking along. The cold rain felt amazing. What a contrast to the heat from the day before. Other hikers were bundled up. Not me! Shorts and t-shirt all the way! Thankfully the rain only lasted 20 minutes. But the overcast skies and wind remained. Probably 20-30 mph winds. I munched on Mentos as I climbed steadily. The scenery was spectacular. The best of the trip by far. 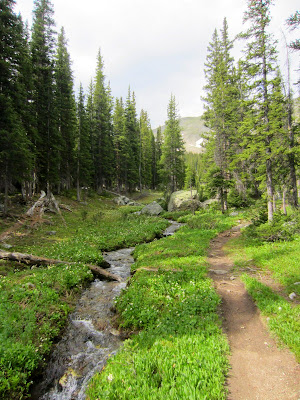 Above treeline, I came upon two more retired thru hikers from Kansas City. We chatted for a while as I could tell the altitude was hitting them hard. About 20 min later, I crested the range and marveled at the views of Copper, Breck, and Leadville! Man, did Mt. Massive and Elbert seem so far away! It was still cold and windy, but I was loving the long stretch above treeline. My pics capture it all. 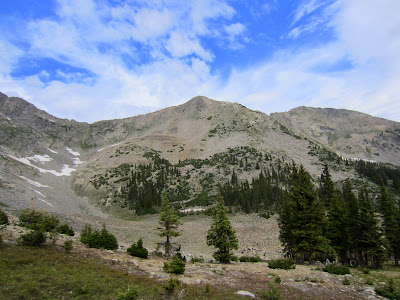 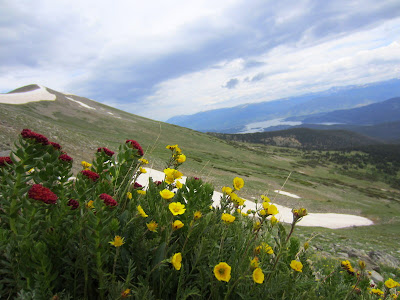 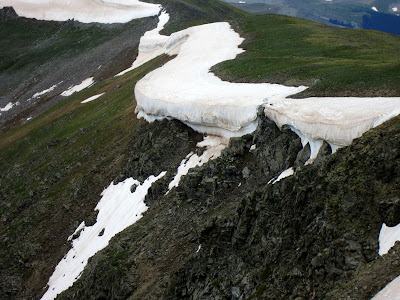 Once I could see Copper, my mind shifted to the big lunch I had planned. The other days, I broke for lunch at 11am. I was almost there now, but really wanted to wait for a feast at Copper. What transpired was me almost jogging the entire 2500’ drop. It took longer than I hoped, despite my speedy pace, especially the traverse from the road and along the ski slopes. It was past 1:30pm by the time I left the trail, cut through some condos, and made it to the car!!  We had left one there a week prior and it served as a resupply station for me.

10 minutes later, I had unloaded, changed shirts, put on flip flops, and had a wet wipe bath! Time for food! As I walked through the Village, I noticed a tremendous number of ladies wearing tight pants and carrying rolled up mats. Yoga Festival! I bee-lined it for Endo’s Café and ordered a blackened bleu burger, fries, salad, and a Coke.

I had given myself 3.5 hours to hang out at the Village. I walked around a bit, strolled through the market (bought nothing), used a public restroom, and went back to the car to sit and call Tanya. Once off the phone, I felt it. Despite having another 1.5 hours to relax, I could tell the trail was calling. My gut told me I wasn’t supposed to be hanging out here, but to be hanging out on the trail….and preferably at a cool campsite I was sure to find that night. I heeded the call and packed up in about 10 minutes and was off to reconnect with the trail. Once on it, the agitation turned to peace.  Yes, I thought about bailing on the rest of the trip to drive home, but I knew deep in my being that walking this trail was where I needed to be.  Going home would be worse than any DNF at a race.  I moved slow, but steady. I had plenty of time to hike the 3-4 miles to find a site – and I would be very picky! I found myself getting emotional over the next hour or so.  Leaving the modern comforts at Copper and knowing the trail offered something way better, was a grand revelation for me. 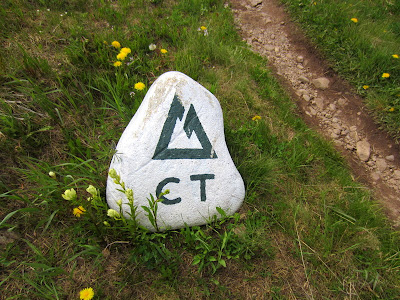 Finally, I arrived at this site. Perfect! I was so happy to not be hanging out at Copper. 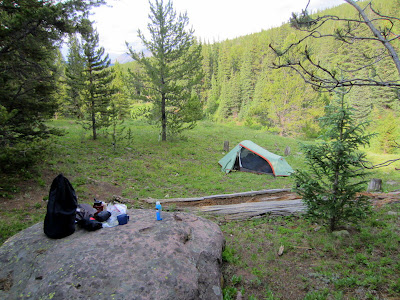 Now this is a campsite!! Yeah! A view, big loud creek, firepit with wood, nice tent spot, open space, no mosquitoes, no rain, storms, or wind. 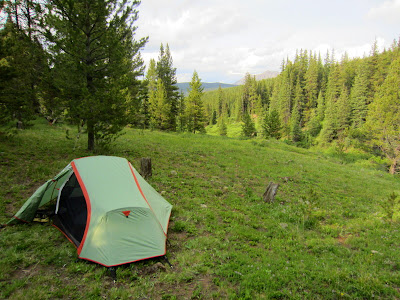