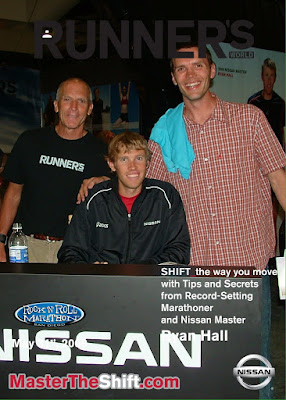 When we went to the expo to pick up my packet on Saturday, I was amazed at how big the event was. It took up the entire San Diego Convention Center. After wandering around a bit, I got all giddy when I noticed some familiar faces in the Nissan booth. I couldn't resist the opportunity to get in line for an autograph from Ryan Hall and Bart Yasso.

You may not know who Ryan is. He recently placed 3rd in this years Boston Marathon. He also holds the record for the fastest debut marathon by an American runner (2007 London Marathon). On top of that, he is the US record holder in the 1/2 marathon (the only American to finish 13.1 miles in under an hour) at the 2007 Houston Half Marathon.

Bart, the older guy, is a running legend. He works for Runners World magazine, but it's his amazing running escapades which are chronicled in the book, "My Life On The Run", that have elevated him to legend status. He also invented a training workout called "Yasso 800's", which are a predictor of your marathon finish time.

I've been following Ryan Hall since last year's Olympics in which he placed 10th. The more I've gotten to know about him, the more I'm impressed with his character. I finished Bart's book a few months ago and was enthralled with all his stories. Needless to say, it was an absolute treat for me to meet BOTH of them and get their autographs on my race shirt!
Posted by Woody at 7:43 PM