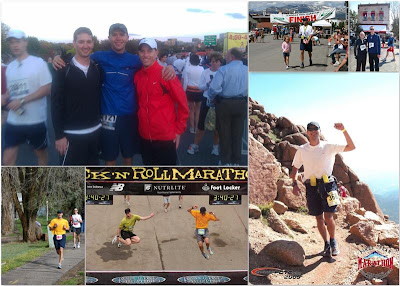 2009 was an extraordinary year of running for me. East Coast to West Coast, sea-level to 14,000', nation's capitol to small historic mining town...what an adventure it has been! When the Marine Corp Marathon was over in October, I was sad to see the final race for the year come and go. What made it so memorable? To start, I was fortunate enough to run two marathons and one half marathon with friends. There's something special about sharing the running experience with someone else (RnR San Diego Marathon w/ James, the MCM w/ Brian, and the Platte River Half w/ Scott). Prior to this year, I had never run a race with someone. The camaraderie throughout our training was a bonus as the constant emails and talk in the months and weeks leading up to the races just made the experience that much sweeter.

2009 was also the year of my introduction to trail running. It didn't take long for me to get hooked. Maybe it's because Colorado is a trail runner's paradise, but I think I found where the future of my running endeavors is heading. The Leadville Heavy Half and the Pikes Peak Marathon were amazing experiences, but the training runs throughout the summer were just as, if not more memorable. That is something I surely can't say about training runs on the roads.

Back on the road running front, in early in '09, I finally got a Boston qualifying (BQ) time at the CO Marathon in Ft. Collins. This was a big milestone as many a runner dreams of running in Boston. After my 11 second BQ miss at the NH Marathon in 2008, I was happy to get it with more than five minutes to spare in Ft. Collins.

Check back tomorrow for more 2010 running hopes and dreams...
Posted by Woody at 8:49 PM