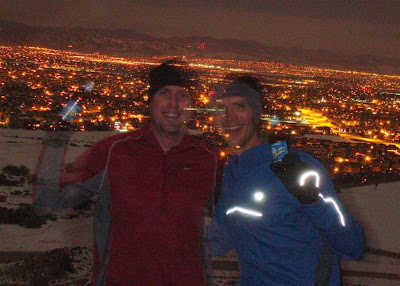 New Year's Eve is typically an uneventful night for us. Not so for me in 2009 when a "Blue Moon" rose into the cloudless sky. James & I have completed several "full moon" runs in 2009...usually starting around 9pm, but never a "blue moon" run...and never one ushering in a new year at midnight.

Our plan was to meet at 11pm, run 4 miles to the top of Wildcat Mountain, crack open two bottles of "Blue Moon" while enjoying the Denver fireworks off in the distance as the clock struck twelve.

With a blanket of snow cover all around, we couldn't believe how bright it was running up the trail. Everything went great until we got to the lookout...about 13 minutes early. You see it was 18 degrees out and there was a stiff breeze blowing on the glaze of sweat produced from the run up. It was a long wait for 2010 to become official. The beer was delicious, but I could only drink half of it before I started to feel my lips freeze to the bottle!

The last mile of our run back was on the road leading to our house. I wish I could have seen the looks on the faces of people driving home from their parties when they passed two guys out for a midnight jog! Definitely a memorable night! Thanks James!
Posted by Woody at 8:48 PM