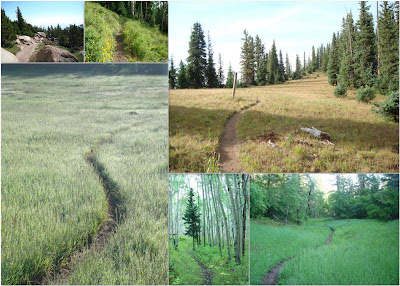 First up...the Boston Marathon! Participating in it this April will be a once in a lifetime experience. They have been holding this marathon for 114 consecutive years! The more I read about the history (thanks again for the book Brian!), the more excited I get to run in the footsteps of all the amazing runners who have made their way from Hopkinton to Boston. Flights and hotel are booked. I'm registered and official training began on 12/14.

After Boston, I'm going to fulfill my promise to James to compete with him in a sprint triathlon. We've decided on the "Tri the Creek" which is in June and at the same spot as Tanya's "Tri the Cure" race has been. I'm currently cross-training for Boston by getting in the pool once a week. I always thought swimming laps would be a nightmare for me. But like little Mikey in the old Life cereal commercials, you could say of my swimming, "he likes it!"

After this, it's all trails going forward. I find that trail running awakens my senses. Sights, smells, and sounds are all enhanced and it opens the door to taking in God's creation in its full glory. It taps into some innate longing in me to be free of all the modern trappings I'm surrounded by daily. I promise I'm not planning to become a hermit in the woods. No, I appreciate the wilderness because I find it helps me keep a healthy perspective on the fast paced world in which we live. I've never been one to experience deep thoughts while I run. To the contrary, my mind shuts down and I live in the moment. At first, my multi-tasking nature thought this was wasting precious time I could be using to think about things going on in my life. Now I realize just how much of a gift the opportunity to live in the moment really is. I'm sure the same could be said for any activity out in nature away from the hustle and bustle of life.

I've got some lofty goals for July-September. I feel I'm ready to tackle a 50 mile trail race. Running the PPM last year opened my eyes to just how much I enjoy running in the mountains and gave me a strong taste for the ultramarathon scene. The longer distances use to freak me out. Now they're just a number that presents a new challenge to be enjoyed.

To that end, this July we'll be heading up to the Silver Rush 50 in Leadville. This is where I ran the heavy half marathon last summer. Not only will it be 50 miles, but all of it will be between 10-12K feet with just under 8K feet of elevation gain/loss. I'm planning on another one in September up in Steamboat called the Run Rabbit Run. The thought of a trail race during the peak season of aspen gold sounds awesome!