The Bandera 100k didn't turn out quite how I anticipated.  I had envisioned training hard, flying down there, kicking some butt, and coming home feeling quite proud of it all unfolding just as planned. Here I sit now feeling quite humbled by the whole thing. Oh, I heard all the warnings about the rocky course, but c’mon, how bad could it really be? I saw pictures of the course and there seemed to be just as many pictures of flat single track as there were of rocky spots. Can't I just power through the rocks and then recover on the flats?

The Texas Hill Country is beautiful. The town of Bandera is 50 miles NW of San Antonio, and there’s a reason they call it “the cowboy capital of the world.” You’re not going to find any big box stores, chain restaurants, or even common hotels. No, it’s like a page was ripped out of the old Wild West with a historic Main Street, open land sprawling as far as the eye could see, and dude ranches galore.

Instead of camping, I decided to get a room in town. Looking for something cheap, I settled on a place called the Bandera Bunkhouse on Main Street. It was a no frills small room with a bed, bathroom, broken TV, and a fridge. It was also located right next to the Bandera Saloon (which had a very large “Live Music” sign on the front). Sure enough, the music started pumping around 8:50pm and just kept on thumping. Thankfully I fell asleep at 10 and didn’t wake again until morning.

The weather was forecasted partly sunny in the morning, cloudy in the afternoon, and rain by late afternoon. Many of the runners chatted about finishing before the rain came. While that would be nice, I knew it was out of my control, so I felt prepared if the rain came.

When the race began, the lead pack was out of sight in a matter of minutes. The first 5 miles were very technical, climbing around Sky Island and Ice Cream Hill, but with fresh feet and loads of energy, the pack of 5 runners I was in plowed through it in no time. Then things ease up a bit for about 10-12 miles before having to pass over the “Three Sisters” and heading to Lucky Peak, Cairns Climb, and Boyles Bump. Those final 15 miles of the loop were technical yet again.

Okay, let’s talk about the rocks. I think it's just one of those things you need to experience in order to fully grasp what I’m talking about. But I’ll try anyway. The hills are short & steep. They feature climbs of a several hundred feet with no switchbacks. Now try to picture truckloads of golf ball, baseball, and softball sized rocks scattered over the trail. Some embedded, most not. Going up the hills was difficult, but coming down was nothing short of treacherous. Tripping and falling is not an option as it would probably end your race.  You can click here to see over 700 photos of the course, but you'll probably fall into the same trap I did thinking it isn't so bad.

Before moving on, I must mention the Sotul plant…or should I say cactus. This evil plant is everywhere and could not be avoided. It looks like the type of cactus we have here in Colorado (long green leaves with a sharp needle point), but the one difference is that the leaves are serrated. When running through the sotul you could just feel the leaves slice your legs…think paper cuts by the hundreds. 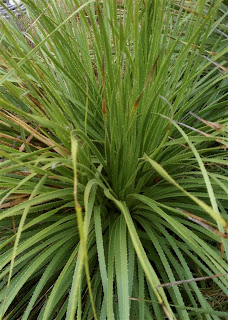 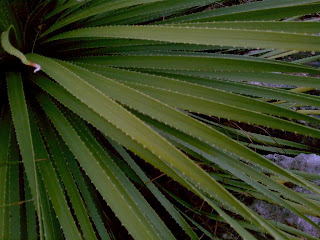 Just like a knife
Despite the rocks & sotul, I was enjoying my fresh feet & relaxed pace and life was good.  As I cruised over the rocks, I was pleased that it didn't seem to slow me down or have any negative effects.  But as the day wore on, the feet deteriorated as the freshness disappeared. This really hit me at mile 27. I had been running a great race, but I was halfway through that final 10 miles of technical climbing and my feet whispered politely to me that they were done. Not good when you’re facing another 35 miles.

I finished the first 50K in a respectable 4:54. I had a nice hotspot on my big toe, so I stopped to take off my shoe and address it. I’ve read about runners using duct tape to care for hotspots and blisters. I even brought some with me wrapped around my SCap bottle. What I failed to learn was exactly what to do with the duct tape! So I ripped off a square and stuck it to the bottom of my toe, put my sock back on and started running. Well, you could probably guess that the tape didn’t stay in place, and now I had a bunched up foreign object in there. It finally shifted into a spot that didn’t bother me, so I just kept trucking.

I was all alone on the second loop and my plan was to put on the iPod and just zone out a bit while I ran.  But to my dismay, it was announced at the trail briefing the night before that they have a new rule….no iPods! Needless to say, instead of zoning out to music, I got to focus on my feet and the new blisters that I could feel popping up. 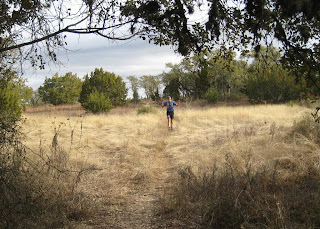 Coming into the Cross Roads aid station - Mile 47.  Photo by David Bubier
I got to mile 42 and that’s when it really hit me. I had 20 more miles of this junk and 15 of it were the most unfriendly. I saw my Uncle David & Aunt Hildy at mile 47. They drove out to cowboy country to catch a little of the race and to see the finish. It was certainly the bright spot of the second loop. After leaving the Cross Roads aid station for a 5 mile loop, I was hit with what I can only describe as exploding toes. The blisters on my right foot were at the boiling point. I stopped, took my shoe off, removed the bunched up piece of old tape and stared at about 5 blisters with the skin on my little toe peeling off. What do I do now? This time I slapped a piece of duct tape all the way around my big toe and then just left the other small ones to fend for themselves. I’m not sure the tape helped, but after another two miles, the blister pain settled down and became manageable.


Leaving Cross Roads aid station - Mile 52.  Watch me take off like a rocket!  Video by David Bubier
Back at Cross Roads, I saw David & Hildy again before venturing on the final 10 mile survival shuffle. My famous last words to them were, “it’ll probably take me 2...2:15 maybe...or around there.” Haha! How about 2:45 for 10 miles! The sun was setting, temps were dropping, and breeze was picking up. I went for as long as I could before whipping out my jacket and light. I actually enjoyed being out there in the dark. I didn’t enjoy how I was feeling at the time, but it was peaceful. Nobody was even remotely close, so I could curse the rocks as much and as loud as I wanted! Everything about this stretch was slow. I was in survival mode and didn’t want to fall. I just tried to make it from glow stick to glow stick in hopes that I would finally pop out on the dirt road that lead to the finish line.

Finally it came, and I ran the half mile into the finish. 12:10:50.  Joe Prusaitis (race director and finisher of over twenty-five 100 milers) was on the other side ready to give a handshake and present me with my first BUCKLE!  David and Hildy were also there for hugs and to help celebrate. I only wish I didn’t have to make them wait so long! 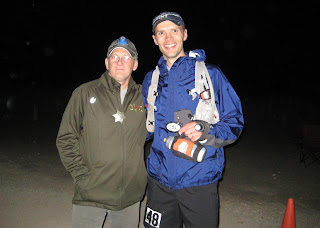 Loving the buckle!  Photo by David Bubier
On a positive note, I beat the rain! It absolutely poured that night and I can only imagine the experience of the runners that were still out on the course.  AND...I'm now 1-1 against Geoff Roes in head to head competition!  Unfortunately, he dropped at the 50K mark after a very rough day.  Dave Mackey shredded the course and set a new record by over an hour finishing in 8:17.

With a few days separation from the race, I have to say that I'm now glad for this experience.  I was disappointed that things unraveled after what I thought was a good first loop. I learned a lot, and I supposed you need a race like this for the lessons to occur. I’ll try to process that in future posts, but for now, I do feel I’m a better runner because of Bandera. I can tell you that I don't plan to be back (for the 100K). Joe and his crew of volunteers put on a spectacular race, but as I hobble about on my tender feet, I know 62 miles on that course is not for me.  But then again, I have been heard saying "never again" far too many times for anyone to believe me anymore.

I must end in saying that I can’t thank David & Hildy enough for coming out to support me, and then taking me back to their lakehouse in Austin for the night. I slept in the most comfortable bed and ate like a king! Breakfast on Sunday featured three Texas-sized & shaped waffles and 8 strips of bacon. Lunch #1 was two bowls of pasta soup, and lunch #2 was a feast of beef brisket & sausage at Rudy’s BBQ. I thoroughly enjoyed my time with you both!
Posted by Woody at 10:23 PM