It's All About Perspective

Here's a bunch of random stuff from the last few weeks...

1.  Jumbo Medal - I got a package in the mail last week from the NH Marathon organization.  I guess I won the male open division (20-39).  I knew I finished in 6th place overall, but didn't think about age group awards.  I'm more excited that the five guys that finished ahead me were all in the 40's!  I'll be there soon enough, so it's always great to be reminded that there are some solid running days ahead!  The actual award is somewhat funny.  It's a jumbo version of the finishers medal with "Men's Marathon Open First" inscribed on the back.  Hey, I'll take it! 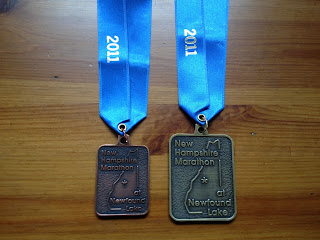 2.  Perspective Change  - I've kept my running up these last few weeks, but it has been a real test of discipline and determination since mustering up motivation has been a challenge.  The recent wintery weather has really got me down.  I can deal with the dark mornings, but I'm not ready for the consistent temps in the low 20's with wind and snow we've been seeing.  I revisited a simple poem (Whether the Weather) I posted last year and realized I need to toughen up and accept that the only thing I can control is my response to the conditions.  My morning run yesterday was the first after my perspective change.  I ran 9 miles in almost 1.5 hours.  It was slow-going on the trails, but I had a great time simply because I decided before the run that I wanted to.  Good mental training and there's some life application built in there too!


3.  The Daily Grind - I was thinking about the fact that I really haven't taken a break from running in the last three years.  I don't feel I need to as I'm having fun, staying healthy, and avoiding burn-out.  I also have resonated with those talking about consistency over the years (here and here).

4.  Bundling Up - I've been thinking a bit about what Lucho has said recently regarding keeping warm.  A large part of my motivation issues are due to the early season cold temps & wind.  I usually wear just enough to get me through a run without getting too hot or cold.  That first mile is always brutal trying to warm up.  I'm going to give his suggestions a try by layering more than usual.

5.  Bandera Prep - My training started about 2-3 weeks ago.  I'm ramping up mileage and trying to get over to the foothills once a week.  I started my training for Bandera last year around 11/1 and put in two big months of running before racing on 1/8.  In hindsight, I ran way too much in December and really didn't taper much at all. Thus, the earlier start this year.  I'd like to get in a double at Deer Creek or Falcon this month and then tackle el Chubbo Grande in December before the taper commences.

6.  Numbers Game - I recently crossed the 10,000 mile mark a few weeks ago.  I started keeping track of mileage in 2006 when I recorded just over 400 miles that year.  I'm about 125 miles from passing my total from last year and only 380 away from cracking 3000 for the year.  It's a little goofy to be chasing numbers, but it's just one of many small motivating factors that gets me up early in the morning to head out for a run!

7.  Leadville 2012 - It's on!  This didn't make the Redemption Tour since I felt like none was needed.  But I am looking forward to seeing what I can do here with one under my belt.  Now, if I get into Hardrock??  Yikes.
Posted by Woody at 10:49 AM