First off, a huge thanks to the Agile Fox, Chris Boyack, for all these really sweet pictures!  He showed up and used his mad skills to catch the true essence of the race in some amazing shots. 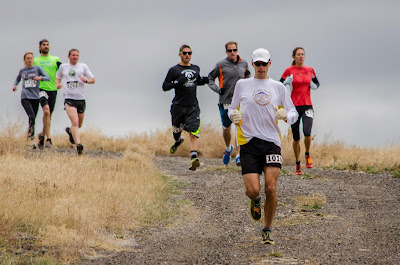 I've been wanting to run this race for years now, but it always fell on the same Saturday that we have an annual work meeting.  The first mile of the course heads up a bike path right behind my house and it just killed me not being able to run a trail race in my backyard.  This year the meeting date was changed, so I was all in.

With an iffy forecast, I was pleased to wake up on Saturday to sunny skies!  My cousin Scott came over and we jogged down to the start about a 1/2 mile away.  We kept jogging around the park to stay warm until the start.

After some confusion figuring out which direction to start the racers in, the organizers sent us on our way to the hilly course.  Like the Wildcat Mtn Trail Challenge, this race is constantly going up and down.  That's fine if you're out for an easy run, but try cranking up the pace and this course is tough.

Once we hit dirt, I found myself running with the #1 (Nicole) and #2 (Lindsay) ladies.  They were flying fast and I felt like I could sustain their pace.  We'd end up running very close to each other until mile 9.  It was fun watching the two of them jockey position and you could clearly see how Nicole was strong at the uphills while Lindsay excelled on the technical downs.

Around mile 6, our mellow weather came to an abrupt end as ice pellets started to fly.  Man, they hurt!  We got pinged for about 5 minutes before the ice turned to snow.  Then the biting wind and snow stuck around until the end.

Around mile 9, the last long uphill climb began and I was able to pass Lindsay and create some space between me and the ladies.  I wasn't feeling it on the climb, but I'm pretty sure they were feeling it less.  I set my sight on a guy ahead of me, but could only match his pace, so I didn't make up any ground.

While my heart continued to pound in my chest, I reached mile 11 and the long downhill stretch back to the finish.  Time to let loose and fly.  This was when I came upon a dude sitting in the tall grasses with a Boston Marathon jacket on.  Hey, I recognize the guy behind the camera lens....Chris!  I shouted a hello, but had to keep moving in order to end the pain. 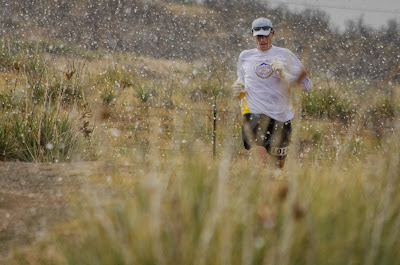 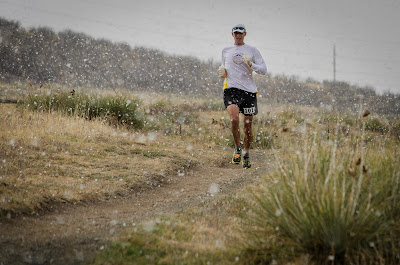 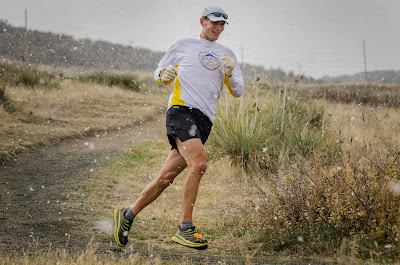 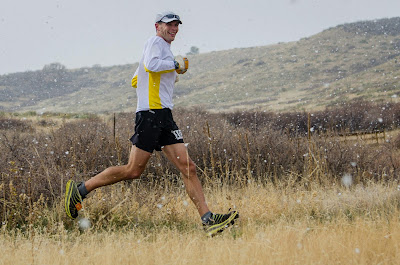 The end comes pretty fast once you hit the bike path.   Despite not catching the guy I was chasing, I did come upon another struggling runner that I passed right before the nasty little hill leading up to the finish.  Passing him got me into the top 10!  I finished in 1:28:32 which was a PR for me by about a minute.  But then I compared notes with a few other runners and learned the course is .3 miles short.  So, no PR for me, but it was pretty dang close and still came out to a sub-7 pace for the race.  Had it been a full 13.1, I probably would have been about a minute off my PR and for that course - whoa nelly!

There were some very fast times thrown down by other guys.  Scott came across the finish line soon after me nabbing 2nd in his age group - and that's with 58 miles of marathon training on his legs that week!  The top two guys went under Dave Mackey's course record with the winner breaking it by five minutes!
Posted by Woody at 8:00 PM