I didn't know quite what to expect of this race.  I was amped to be running in Moab, but only felt fully recovered from Bandera about 12 days prior.  I got in a few 15 mile runs in between the races, but most of my runs fell in the "I'm still feeling run down and hope I don't hurt myself" category.
Looking at the finishing times from the last few years, I felt a sub-5:30 was attainable with a solid, but not hard effort.  Once the race started, I felt like I was in for a good day, and my thoughts immediately shifted to a 5:00 goal.  Well, I split the difference with a 5:16 and given it was my first time on that course, I'm happy.
I've never had a race where I crossed the finish line and immediately wanted to sign up to run it again.  I loved running in Moab as the scenery was spectacular, running surfaces varied, elevation changes manageable, and the distance was just long enough to provide plenty of time to soak it all in.  It will be difficult to keep this race off my 2012 list. 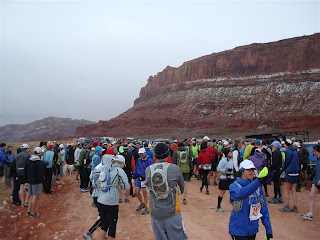 Saturday morning's weather featured temps in the 40's with serious wind (sustained 10-30 mph...all day) and spitting rain.  Everyone was shivering and just wanted to get running to warm up.  I had picked Todd G up at his hotel and we met up with Aaron K at the start.  After warming in the car a bit, we all made our way to the start. 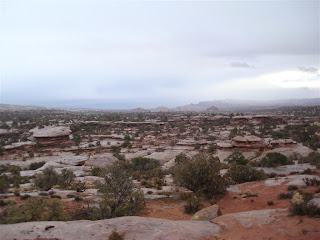 The rain stuck around for about an hour and a half.  The first 18 or so miles are predominantly on rough jeep roads, so we never had to contend with the slippery rocks in the picture above.  This part of the course allowed plenty of room for everyone to spread out and get in their groove. 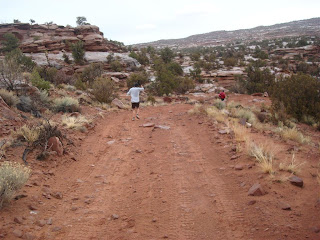 No more than 10 minutes into the race, I bumped into Rob G.  I chased Rob for the last 15 miles of Silver Rush last year and never caught him as he finished a minute ahead of me.  We chatted for a good 30 minutes while we ran.  He's giving the LT100 another shot this year, so I tried to glean as much wisdom from him that I could. 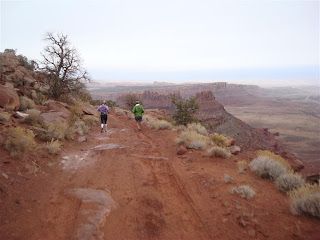 The lady above in purple is Tressa from Boulder (5th place woman).  She was running a solid pace, so from about miles 8-25, I tried to keep her in my sights.  Every time I caught up to her, she'd shoot off and take the lead right back. 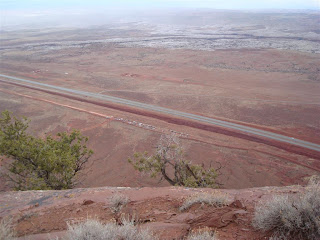 Mile 10...and we're back at the start.  Well not really, but it was cool to see how high we had climbed.  It was around now that I started listening to some tunes (first time in a race).  I enjoyed it, but felt very anti-social in the stage of the race that usually I chat a bit with other runners.  A funny moment came when somehow the "Beer Barrel Polka" got queued up and started playing.  I'm not much of a polka person, but man, I had to use some willpower to resist the urge to start dancing.  It was awesome to be having my own little Oktoberfest polka party and no one knew!  Maybe they could have seen my hands bouncing the polka. 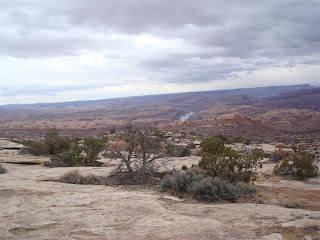 Around miles 19-20, the race transitioned to slickrock running.  I knew this was coming, but I wasn't quite prepared for the challenges it presented.  Route finding is difficult to say the least.  They marked the course very well with pink tape, but with no "trail" to follow whatsoever, any momentary zoning out could find you way off course.  There were also many more short & steep climbs.  This stretch of the course finds you running to the south the whole time.  Well, that was the direction the stiff wind was coming from.  The resistance reminded me of running Pikes last year when the wind was brutal above treeline. 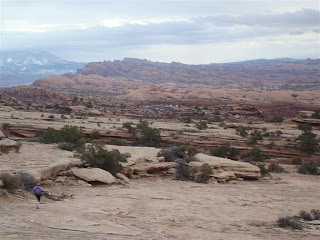 Hey look...it's Tressa again!  I would end up passing her and another guy, Jason, around mile 25.  It was a huge confidence boost to feel like I was running strong towards the end.  Well, I learned there's A LOT of race left in those last 9 miles!  I also didn't care for being the one in charge for route finding after I passed them.  It was so much easier letting them figure it out and I could just follow. 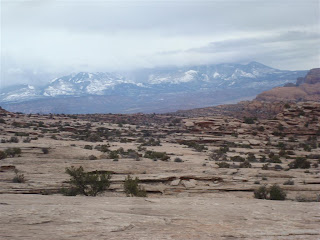 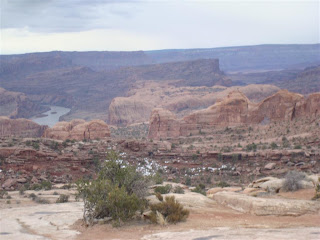 Getting closer to the finish now.  With about 6 miles to go, I really got away from my calorie intake.  I found myself thinking that with only six miles, I could push through anything.  With 3-4 miles to go, the lunacy of that thought came back to bite me.  I started bonking and in my now cloudy brain, I didn't think to eat something to fix it.  I fumbled along until I decided to take a gel with 1.5 miles to go.  While that started to kick in, Tressa and Jason both passed me and left me in a pool of self-pity.  I was able to kick it up a notch or two, but not nearly enough to catch back up to them! 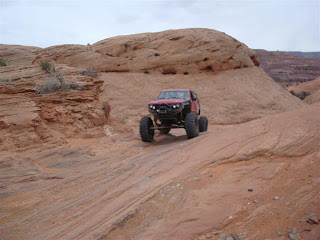 I finally snapped a pic of one of these ridiculous looking 4X4 vehicles navigating ridiculous climbs on the rock.  I can tell you I would rather run the rocks any day...than get tossed to and fro in one of those trucks.
After crossing the finish line, I immediately grabbed the clothes in my sweat bag to layer up.  The rain started back up and combined with the wind, my body temp was dropping fast.  Lo and behold I noticed they were serving hot potato and artichoke soup in breadbowls.  Normally, I can't eat anything substantial for hours after a race.  I grabbed some soup and started wolfing it down.  It was the most delicious soup I've ever had. 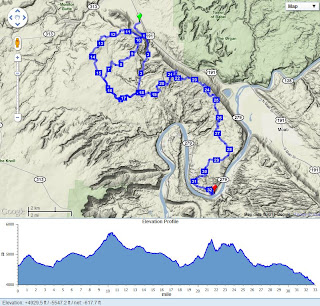 Overall, I had a great time in Moab.  I'm still looking for a race where I put all the pieces together.  Not one without issues or adversity, but just where I pace myself & fuel well.  Eleven weeks until the CP50 and I'm looking forward to recovering a bit before then starting a buildup to my summer races.  I feel like the worst of winter is over, and with a little more patience, excellent trail running is right around the corner.
Posted by Woody at 6:49 PM